Alien pyramid on Ceres? More like bad media on Earth

The whole media is abuzz after NASA released some pictures of the dwarf planet Ceres, the largest object in the asteroid belt, which lies between the orbits of Mars and Jupiter. But while it's somewhat expected for pseudoscientists and alien fanatics went crazy after they spotted what appears to be a huge pyramid-shaped mountain, I was expecting more from the mainstream media. I know, right?

The whole media is abuzz after NASA released some pictures of the dwarf planet Ceres, the largest object in the asteroid belt, which lies between the orbits of Mars and Jupiter. But while it’s somewhat expected for pseudoscientists and alien fanatics to go crazy after they spotted what appears to be a huge pyramid-shaped mountain, I was expecting more from the mainstream media. I know, right? 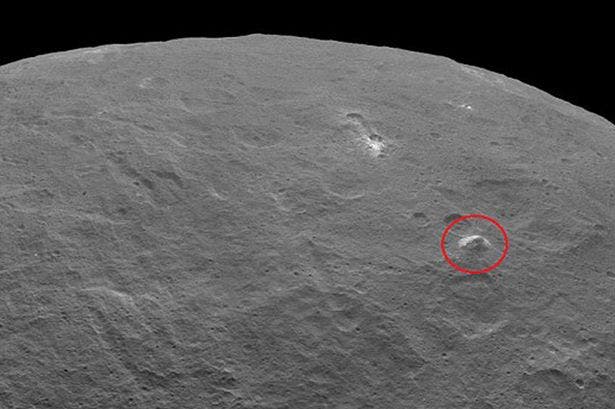 The photograph was captured June 6 from a 2,700-mile distance above the dwarf planet’s floor by NASA’s Dawn orbiter, revealing a 5 kilometer (3 mile) high mountain. In its typical rational fashion, NASA didn’t jump to any conclusions.

“The surface of Ceres has revealed many interesting and unique features. For example, icy moons in the outer solar system have craters with central pits, but on Ceres central pits in large craters are much more common. These and other features will allow us to understand the inner structure of Ceres that we cannot sense directly,” NASA quoted Carol Raymond, deputy principal investigator for the Dawn mission, based at NASA’s Jet Propulsion Laboratory in Pasadena, California, as saying.

As a matter of fact, researchers actually speculated that the “pyramid mountain” may be caused by by extremely reflective salt deposits. Salt is generally less dense than surrounding rock, so in geological periods, it tends to rise to the surface, pushing upwards on the other rocks. Other possibilities include ice sheets, volcanic activity, or water steams from beneath the floor. Either way, there are several perfectly logical geological explanations – not aliens. Funnily enough, according to an Express UK report, conspiracy theorists have provided “conclusive proof” of a highly developed alien civilization that inhabits the 600 mile diameter dwarf planet. Sure…

Now, some real science: the robotic NASA spacecraft Dawn entered orbit around Ceres on 6 March 2015. Its goal is to study the dwarf planet in unprecedented detail and among others, to see if it has any liquid water. The ubiquitous features in Ceres’s IR spectrum are those of hydrated materials, which indicate the presence of significant amounts of water in its interior. Other possible surface constituents include iron-rich clay minerals or carbonate minerals, which are common in some asteroids. Dawn revealed a large number of craters with low relief, indicating that they lie over a relatively soft surface, probably of water ice. One crater, with extremely low relief, is 270 km (170 mi) in diameter. Dawn has also identified some rather intriguing bright spots on Ceres.