by livia rusu
in Alien life, Space
Reading Time: 3 mins read
A A
Share on FacebookShare on TwitterSubmit to Reddit

It takes the form of vapor plumes erupting into space and the theory the scientists have agreed upon is that the main cause could be the ice geysers on the planet surface functioning similarly to volcanoes. The scientific explanation of the fact is detailed in the journal Nature on January 22, where it is explained as a result of the orbit bringing the planet so close to the sun to partly melt its surface, mostly covered with ice. The amount of water the scientists believe it produces is shockingly large. 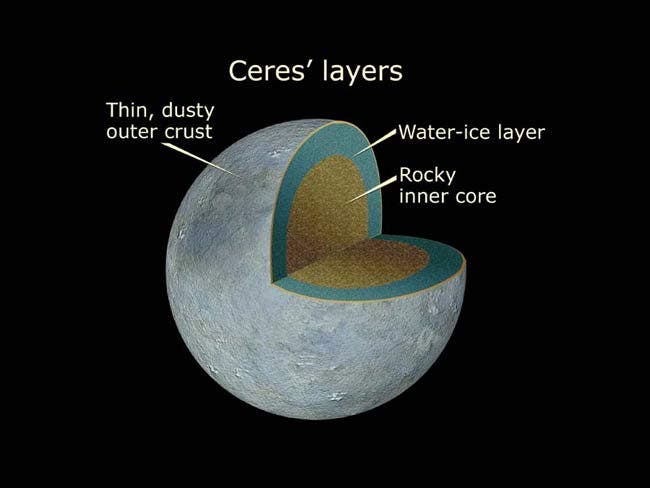 While the first hypothesis on the vapor formation is icy volcanic activity, another possibility would be the sublimation of the ice near the surface, or turning directly from solid to gas, pulling along with it dust from the surface, similarly to comets.

One of the scientists conducting the researching program declared that ‘This is the first time water vapor has been unequivocally detected on Ceres or any other object in the asteroid belt and provides proof that Ceres has an icy surface and an atmosphere’. Michael Kuppers is an active member of the IAU (International Astronomy Union) in benefit of the European Space Agency. Pluto (formerly classified as a fully recognized planet), Eris, Haumea and Makemake are, along with Ceres, part of the IAU lists other dwarf planets orbiting the sun beyond Neptune, out of which only Ceres is known to exist in the asteroid belt.

Ceres is either a dwarf planet or a giant asteroid, depending on the definitions followed, nevertheless the largest object in the asteroid belt. Its framing stated Ceres was believed to be a large asteroid, when, in 2006, the International Astronomical Union reclassified it as a dwarf planet because of its very large size. Ceres is orbiting at 2.8 astronomical units, approximately the distance from Earth to the sun, while its diameter has 950 kilometers of a rocky interior, covered with a compact ice layer. A comparison has been made by the scientists, who believe that by melting its entire quantity of ice the water resulted would actually be a larger amount than all the water we have on Earth.

The scientific community suspected that there existed ice on Ceres, but it was only after using technologies such as the Herschel space telescope or the heterodyne instrument for the far-infrared in researching procedures when a clear spectral signature of water vapors was identified without doubt. And while the astrologists were used to blasting plumes of gas and vapor from comets – mostly because of their icy structure), nobody really expected similar behavior from an object residing in an asteroid belt.