GeoPicture of the week: The underwater illusion from the Mauritius island

by Mihai Andrei
in GeoPicture, Great Pics
Reading Time: 1 min read
A A
Share on FacebookShare on TwitterSubmit to Reddit

Mauritius is an island nation in the Indian Ocean about 2,000 kilometres (1,200 mi) off the southeast coast of the African continent. The first Portuguese explorers found no indigenous people living on the island in 1507, though there is some evidence that the Arabs discovered it in 975. Since then, French, Dutch and English colonists have traded the rule of the island. Mauritius is highly regarded for its democratic freedom, and it was also the only island inhabited by the Dodo bird – the bird became extinct fewer than eighty years after its discovery in what is one of the most tragic extinctions.

At the southwestern part of the island, you will find a fascinating illusion. When viewed from above, a runoff of sand and silt deposits can easily trick you into seeing an “underwater waterfall”. Satellite views (like the one below, from Google) are equally deceiving. 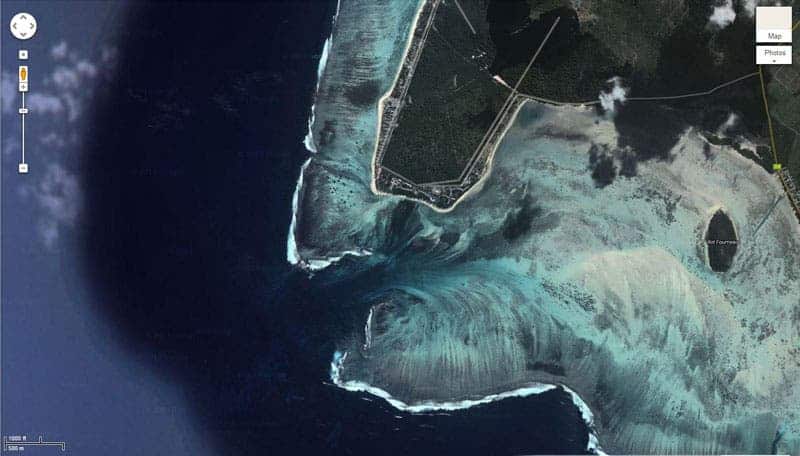 What’s really causing the illusion is the sand (that’s the light-colored portion of the water). There is also a density current caused by waves crashing against that particular portion of the island which creates this natural, waterfall-eseque presentation because of the downward pull of the receding waves/current.

In a way, we’re actually dealing with a type of waterfall – it’s just that the pace at which it is flowing is very, very slow.