Huge asteroid to pass near Earth in November 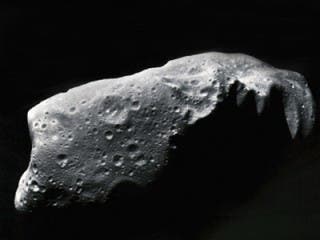 Researchers and astronomy amateurs alike should leave a few days open in their November calendar and prepare for something awesome; one of the major and potentially perilous (in time) asteroids will be making a flyby this year. The asteroid, 2005 YU55 is a round small world with a diameter of 400 meters.

The asteroid will pass closer to us than the Moon, at a distance of 0.85 lunar distances. Due to its large size and small distance, an intense campaign of radar, infrared and visual observations will be launched.

“The close Earth approach of 2005 YU55 on Nov. 8, is unusual since it is close and big. On average, one wouldn’t expect an object this big to pass this close but every 30 years,” said Don Yeomans, manager of NASA’s Near-Earth Object Program Office and the Jet Propulsion Laboratory in Pasadena, Calif.

Asteroid 2005 YU55 rotates at a very low velocity, and due to that, as well as its mass and proximity to Earth, it has been deemed as potentially dangerous, but not this year – at the next flyby.

“We’re already preparing for the 2005 YU55 flyby,” said Lance Benner, a research scientist at JPL and a specialist on radar imaging of near-Earth objects. He said part of the plan is to observe the asteroid with radar using both the huge Arecibo dish in Puerto Rico and equipment at Goldstone.

All in all, should be a great experience for the average astronomy lover, and an extremely useful opportunity for researchers to study future flybys, especially potentially dangerous ones.