by Mihai Andrei
in Alien life 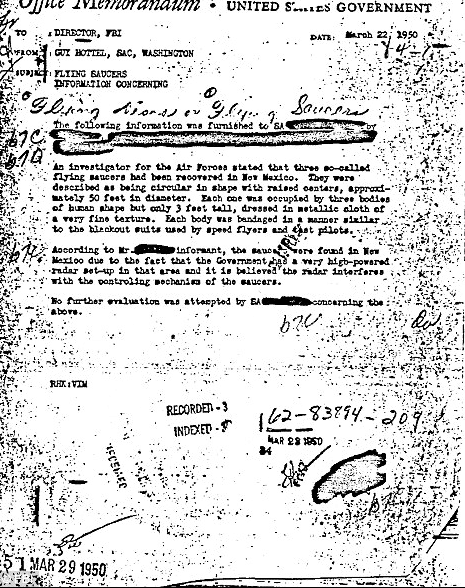 In a surprising move that didn’t get quite a lot of attention, the FBI released an online document archive they’re calling the Vault, in which they openly address, among other things, the alleged aliens and flying saucers found at Roswell. Yes, it’s about little green men, like the ones who are usually portrayed in movies. The memo at the core of this documents, named ‘Flying saucers’, was written by an FBI agent named Guy Hottel, and if the actions and pictures depicted within are for real, then I have no idea why this isn’t all over the news. If they’re not for real, I have no idea why the FBI would release them; either way, there’s something strange about this.

The decades old memo states that “three so-called flying saucers had been recovered in New Mexico’, citing an Air Force investigator. There is also a short description of the flying saucers: “They were described as being circular in shape with raised centers, approximately 50 feet in diameter.” “Each one was occupied by three bodies of human shape but only 3 feet tall.”. What’s weird is that after the alleged UFO crash, the newspapers from all over America, and the world, were screaming about the incident/accident. The army issued that press release, but less than a day after that, changed its mind, claiming that in fact they were dealing with nothing more than a few weather balloons that crashed. Of course, nobody was satisfied with this explanation.

The memo not only states that they were in fact flying saucers, but goes even further, and states that there were three bodies only three feet tall inside them. He also describes their clothing ! An FBI memo explains that they thought they were dealing with flying saucers, and there were humanoid bodies inside them ! Something everybody has been trying to be silent about suddently just got very loud with this memo, and it’s absolutely strange, to say the least. Even though this memo doesn’t represent FBI’s opinion, it does represent that of an agent who was at the spot, and in the center of events, so this is absolutely huge; and I’m not talking about comics, sci fi movies and all that, I’m talking about figuring out the truth.

Another thing that’s extremely interesting is that there are some differences between the 1947 Roswell document and the 1950 FBI memo. While Hottel describes the three alleged spaceships as ‘circular in shape with raised centers’, the 1947 document speaks about one flying disk, hexagonal in shape. So what does this mean ? It seems extremely unlikely that two different official documents of the same incident would differ this much, so does this mean that we’re talking about two different incidents in 1947 and 1950 ? I have no idea. Hopefully, now that the eye of the public opinion has been turned towards this event again, we will get some more details.