by Mihai Andrei
in Nanotechnology, Science
A A

He’s under 3 micrometers tall and was carved with an electron microscope.

It’s always nice when you see a snowman in wintertime, but you won’t see one on the side of the road — unless you happen to have an electron microscope on you.

It all started in 2005, when Todd Simpson from Western University was working on creating isolated silica spheres. He used a relatively common technique in the field, taking a polymer layer with tiny holes and depositing a silica solution inside these holes. When the film is removed, round silica spheres are left behind.

However, in some cases, the silica fell through the hole, creating what is called a “dimer” — a group of two monomers joined by chemical bonds. In a few rare cases, the dimer fell on a pre-formed silica sphere, forming a three-sphere stack. That’s when Simpson realized he had all the makings of a snowman.

Of course, it didn’t have any face or arms so Simpson got to work. He took out an old sample and used the lab’s focused ion beam instrument to carve out eyes and mouth in the top sphere. He used the same instrument to deposit platinum arms to complete his work. In total, each sphere has a diameter of about 0.9 micrometers (μm) in diameter which means that in total, the snowman is just under 3 μm tall. Just so you can get an idea of how small that is, a micrometer is 1,000 times smaller than a millimeter. The diameter of human hair ranges from about 10 to 200 µm.

This isn’t the first extra-small snowman ever created. In 2009, David Cox, a National Physical Laboratory research fellow at the University of Surrey, UK, created another nanoscale snowman using a similar technology — though that one is much taller, at 30μm. They’re both adorable and they both go to show how much our technology has progressed lately. 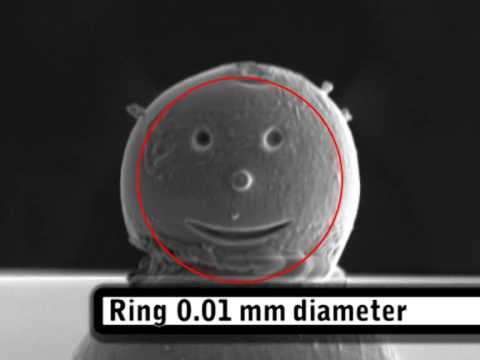