Yeast badges could be the radiation sensors of the future.

by Mihai Andrei
in Biology, Physics, Science
A A

Just like yeast yields bread and beer, it could help lab workers track their daily radiation exposure quickly and effectively.

As I was preparing a homebrewed beer batch a few days ago, I couldn’t help but wonder at the marvel that is yeast. This tiny organism, so small and unassuming, makes so much of what we take for granted happen. Mankind has been using yeast for its selfish purposes for thousands of years, and yet we may only be tapping into a very small portion of what it can actually offer.

For instance, Purdue University researchers think it can be of great help when monitoring radiation exposure. They’ve designed a simple disposable badge which, in addition to yeast, only contains paper, aluminum, and tape. You’d take it, go about your work, and then simply activate the yeast with a drop of water. This will show radiation exposure as read by an electronic device. It’s simple, it’s elegant, and it’s pretty effective.

“You would use the badge when you’re in the lab and recycle it after you’ve checked your exposure by plugging it into a device,” said Manuel Ochoa, a postdoctoral researcher in Purdue’s School of Electrical and Computer Engineering.

The problem is, radiology workers are routinely exposed to low doses of radiation. If you go and you have an X-Ray once in a while, you wouldn’t worry about it at all — but if that’s your job, things start to change. While good design and protective gear largely keep workers within a safe range of radiation exposure, absorbing a little bit is almost unavoidable.

So these workers wear badges which help monitor their overall exposure. But the process is slow and cumbersome, researchers explain.

“Currently, radiology workers are required to wear badges, called dosimeters, on various parts of their bodies for monitoring their radiation exposure,” said Babak Ziaie, Purdue professor of electrical and computer engineering. “They wear the badges for a month or two, and then they send them to the company that made them. But it takes weeks for the company to read the data and send a report back to the hospital. Ours give an instant reading at much lower cost.”

This is where our faithful yeast enters the stage. Much like humans, yeast is vulnerable to radiation. So if you have a yeast badge, the more you are exposed to radiation, the more yeast cells it will kill off. The phenomenon which makes this process into a quantifiable reading is actually quite neat: when you add water to the yeast, it starts a localized fermentation process — just like with bread or beer. This forms carbon bubbles at the surface, as well as some chemical ions. These ions increase the electrical conductivity of the badge, and this conductivity can be measured — giving an instant value of radiation exposure.

“We use the change in electrical properties of the yeast to tell us how much radiation damage it incurred. A slow decrease in electrical conductivity over time indicates more damage,” said Rahim Rahimi, Purdue postdoctoral researcher in electrical and computer engineering. 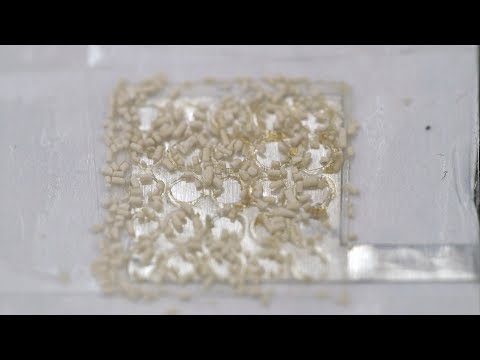 Rahimi and colleagues say that if the device goes commercial, the reading process is simple enough that it could be done with a tablet or smartphone.

They also mention that, genetically, yeast is surprisingly similar to human tissue — so by studying the effect that radiation has on yeast, we could ultimately better understand how it affects human cells.

“For yeast, it seems that radiation primarily affects the cell walls of the membrane and mitochondria,” Ochoa said. “Since biologists are already familiar with yeast, then we’re more likely to understand what’s causing the biological effects of radiation in organic matter.”