A novel way to generate electricity

In the evergrowing search for new energy sources, scientists have started searching for more simple solutions, and what they found was that heat can be an incredible ally. 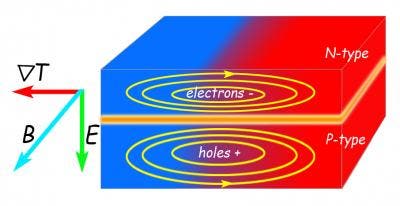 “In the search for new sources of energy, thermopower – the ability to convert temperature differences directly into electricity without wasteful intervening steps – is tremendously promising,” says Junqiao Wu of Berkeley Lab’s Materials Sciences Division (MSD), who led the research team. Wu is also a professor of materials science and engineering at the University of California at Berkeley. “But the new effect we’ve discovered has been overlooked by the thermopower community, and can greatly affect the efficiency of thermopower and other devices.”

What they found was that temperature gradients (differences in temperature) in semiconductors, when one end is hotter than the other end, can produce whirlpools of electric currents, and also, at the same time, they can create magnetic fields at right angles to both the plane of the swirling electric currents and the direction of the heat gradient.

Wu says, “There are four well-known effects that relate thermal, electric, and magnetic fields” – for example, the familiar Hall effect, which describes the voltage difference across an electric conductor in a perpendicular magnetic field – “but in all these effects the magnetic field is an input, not an outcome. We asked, ‘Why not use the electric field and the heat gradient as inputs and try to generate a magnetic field?'”

These remarkable results, Wu explains, can also be duplicated by other kinds of inhomogeneous excitation – for example, by the way light falls on a solar cell.

“Different intensities or different wavelengths falling in different areas of a photovoltaic device will produce the same kinds of electronic vortices and could affect solar cell efficiency. Understanding this effect may be a good path to better efficiency in electronics, thermal power, and solar energy as well.”

Here is the published study.