The first case was reported in the Netherlands.

by Melvin Sanicas
Reading Time: 3 mins read
A A 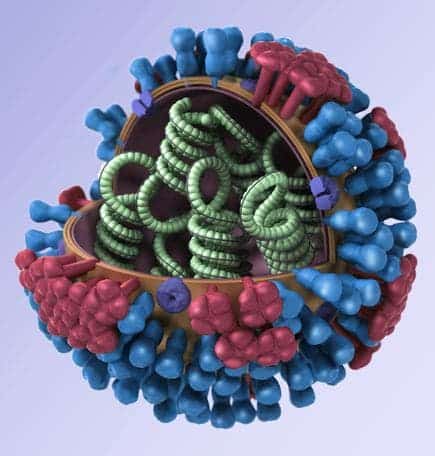 Mutation is an important source of RNA virus diversity that happens because the nature of RNA synthesis is prone to error. This is one of the reasons why the flu vaccine composition is changed each year. For influenza viruses, with segmented genomes, another mechanism for generating diversity is through reassortment. If a cell is infected with two different influenza viruses, the RNAs of both viruses are copied in the nucleus. When new virus particles are assembled, each of the RNA segments may originate from either infecting virus. The resulting “new” flu viruses inherit RNAs from both parents and are called reassortants.

The 19-month-old boy’s symptoms began in early March, and he was taken to a clinic three days later. He had not traveled, been vaccinated, taken antivirals and had no underlying health conditions. Real-time reverse transcriptase polymerase chain reaction (RT-PCR) and nanopore sequencing confirmed the H1N2 reassortant in mid-March. After the boy’s initial clinic visit, he was seen again for an ear infection and he recovered fully after antibiotic treatment.

According to the investigators, increased virulence (severity of the resulting disease symptoms) is not expected and there were no mutations to suggest resistance to antivirals had been identified. Reassortant seasonal viruses have been reported previously. The spread of these viruses was limited, but in one case, circulation continued for three seasons with a reassortant of a former seasonal A(H1N1) and A(H3N2) influenza virus. A reassortant of A(H1N1)pdm09 and A(H3N2) has only been found in India. In the Netherlands, the 2017-2018 influenza season is dominated by influenza B/Yamagata lineage viruses, but the Dutch National Influenza Center characterized around 600 influenza type A viruses, only one of which (the case reported here) was of the H1N2 subtype. There is thus no evidence of an extensive spread of the A(H1N2) virus, but laboratories should remain on alert. The rise of a reassortant that contains the 2009 H1N1 virus would be a serious concern, because the 2009 H1N1 virus is well-adapted to humans and presents an ideal background for the spread of novel strains.