by Alexandru Micu
in News, Robotics, Science
A A

Russian police arrested a robot at a political rally in Moscow, to prevent it from interacting with the public. The robot complied peacefully, witnesses report.

We’ve seen an unprecedented push to develop advanced robots and AIs in the last few years. A big part of this effort has been directed at integrating them within human society — as cooks, guards, workers, farmers, and the list goes on. But more interaction with society means quite a bit of adaptation on our part, and sometimes we’re just left at a loss for how to treat or react to a digital entity with dignity.

Case in point: last Wednesday, Russian police have done a world premiere and detained a robot.

The arrest took place during a Moscow rally in support of Russian parliamentary candidate Valery Kalachev, and the police have yet to confirm the exact reason for detaining the bot — known as a Promobot, manufactured by a Russian company of the same name.

Local news reports say someone called the police while the Promobots were “recording voters’ opinions on [a] variety of topics for further processing and analysis by the candidate’s team.”

I don’t think asking people some questions warrants an arrest, but still, the “police [were] asked to remove the robot away from the crowded area, and even tried to handcuff him,” a Promobot spokesperson told Inverse.

“According to eyewitnesses, the robot did not put up any resistance.”

Considering that the bot was just conducting voluntary surveys in a public space, it’s us humans that jumped the gun a bit here. Promobot’s spokesperson suggests that maybe a member of the public reported the incident to the police “perhaps [thinking that] this action wasn’t authorised.”

“People like robots, they are easy to get along with,” Kalachev said. “There are a few Promobots working for us which are collecting people’s demands and wishes at the moment.”

So all in all, it seems that the arrest was one-sided and Promobot was innocent. Maybe it was sent to the field without the right paperwork being filed in Moscow before-hand. But, funnily enough, this isn’t the first time Promobots had a run-in with the cops. Earlier this year, the bot made international headlines as serial number IR77 tried to escape its home facility in Perm, Russia — twice. The company tried to reprogram the unit so it wouldn’t run off again, but without success.

“We’ve cross-flashed the memory of the robot with serial number IR77 twice, yet it continues to persistently move towards the exit,” Promobot co-founder Oleg Kivokurtsev said at the time. “We’re considering recycling the IR77 because our clients hiring it might not like that specific feature.”

Which brings me to the next point.

It seems to me that the Promobots’ adventures are a big sign that we need to seriously start considering where robots and AIs fit in society. Scientists and lawmakers have been wrestling with the idea for some time now, but it seems to be a pretty one-sided debate — basically, how humans can protect themselves from robots or machine intelligence.

And don’t get me wrong, I’m all for that. But while we need a body of law to protect us from robots, they also need to be protected by potential abuses at our hands. It may seem a pretty sci-fi idea now, but the field has never progressed faster. As artificial intelligence nears our own, where do we draw the line? At what point do we start taking ‘machine rights‘ as seriously as ‘human rights’?

Promobot may not be able to realize what was being done to it but one day, robots will be advanced enough to do that. And I know I wouldn’t like it if someone came and handcuffed me with no good reason as I start writing for the day.

Hopefully, we’ll address these issues before it happens. In the meantime, here’s the world’s first robotic arrest. History in the making! 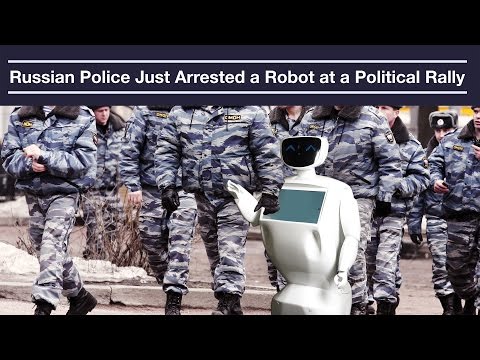