Koko’s compassion might show to the world that gorillas communicate

by Dragos Mitrica
in Animals, Psychology
A A

Just a while ago, I told you how researchers translated the chimpanzee gesture language. It was a real breakthrough, since the work proved chimps are the first animals that we know of  that intentionally communicate through gestures inside their own society, apart from humans. There are other animals, however, that can be taught to emulate human language and directly communicate with us. The case of Koko the gorilla is perhaps the most famous and, at the same time, heartbreaking evidence of this idea.

Koko is a 38-year-old lowland Gorilla who not only learned to speak sign language as a baby but who has grown a love for kittens whom she treats like her own children. Koko could understand 1000 signs on the the American Sign Language system and over 2000 words of spoken English. The gorilla is deeply compassionate towards her feline friends, and could be seen often playing with her kitten friends or teaching them how to eat – she would pretend to bite, then would offer the morsel to the kittens.

One unfortunate day, one of Koko’s pet kitten escaped from the gorilla’s cage and was hit a car. Dr. Penny Patterson, her teacher and caretaker, informed her verbally and through sign language. Koko’s reaction follows.

Here’s the complete video, too. 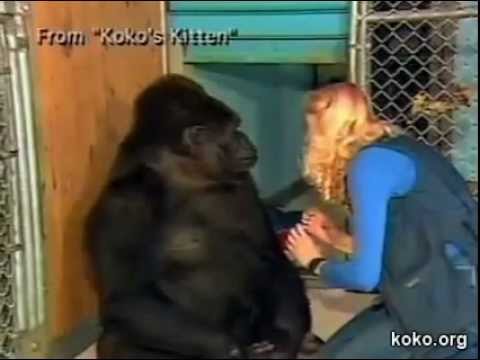 So, does this mean that Koko understands human language? There’s an immense amount of debate surrounding Koko and Dr. Patterson. A lot of scientists believe Dr. Patterson has gravely overestimated Koko’s ability to comprehend human language, since there has yet to be one definite proof. It is generally accepted that she understands words but it is grammar she lacks. And grammar is the most important part of actually communicating. She can sign several words and such but she doesn’t make them consistent and can’t actually form sentences. It is because of this most people assert Koko doesn’t in fact communicate. You can learn more and read up on opinions that both support and criticize claims of Koko’s ability to communicate at the Wikipedia article.

If in fact Koko can communicate, how will the world react when it finds out what was always classed colloquially as a ‘dumb animal’ is capable of feelings, emotions, thoughts and form opinions expressing these? A more important question that might need addressing is whether we actually need any proof whatsoever to treat any living being with the respect we’d show to our fellow homo sapiens.