by Mihai Andrei
in Psychology, Science
Reading Time: 2 mins read
A A
Share on FacebookShare on TwitterSubmit to Reddit

As the outside world looks in, it may seem absurd that thousands of Penn State students have vehemently (even violently) protested head football coach Joe Paterno’s recent dismissal. In the wake of a horrifying, decades-long child sex abuse scandal, Paterno’s silence on the matter—effectively enabling abuse to continue for years at the hands of his defensive coordinator, Jerry Sandusky—has sparked outrage across the country and around the world. Why then, are students and the larger Penn State community so loyal to a man indirectly responsible for repeated incidences of child molestation and rape? 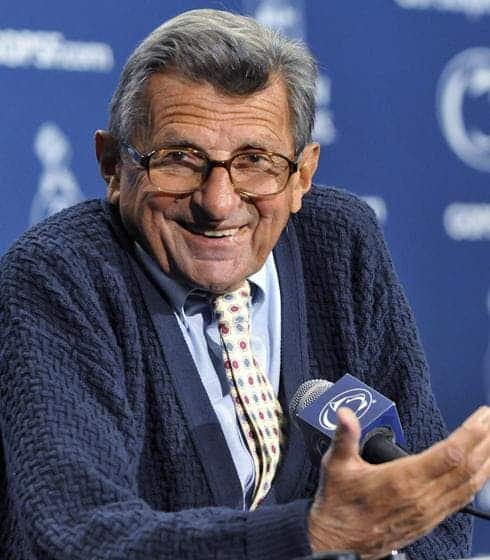 “The person [Paterno] that symbolized the school they go to, that’s given the school stature, that’s made their own selves have meaning and purpose, has now been taken away from them in an
aggressive and sullied way.”

Despite society’s increased secularization, evolutionary psychology holds that human beings have become hard-wired to believe in something, anything. Celebrities and sports figureheads have easily and comfortably replaced idols and gods of the past. Our early human ancestors, explains SciAm, were able to survive precisely because of the social cohesion engendered by religion. As such, idol worship has over the years worked itself into our genetic makeup.

At typical American universities, sports take center stage, and in so doing, create a centerpiece for a religious experience that, to outsiders, may seem absurd. But for those “in the fold,” as are so many Penn State students, alumni, and fans, any threat to this spiritual community robs them of a part of their lives that confers meaning. Biopsychologist Nigel Barber sheds light on the connection between sports and religion, noting in the Huffington Post:

“Some scholars believe that fans are highly committed to their favored stars and teams in a way that gives focus and meaning to their daily lives. In addition, sports spectatorship is a transformative experience through which fans escape their humdrum lives, just as religious experiences may help the faithful to transcend their everyday existence.”

As horrifying as the scandal surrounding Paterno is, violent student riots should come as no surprise, considering the strong psychological hold that a community as tight-knit as Penn State can have on each individual’s psyche.

This article was contributed by Lauren Bailey, who regularly writes for other websites. She welcomes your comments at her email Id: blauren99 @gmail.com.