X-Ray 1896 machine compared to modern one 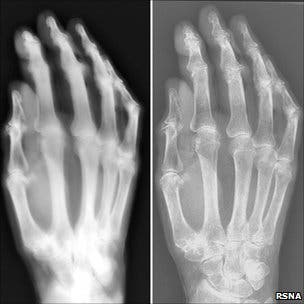 Scientists have dusted and cleaned some X-Ray equipment dating shortly after the discovery of the rays in 1895 and found that it creates some images of stunning quality, compared to its age and simple construction. However, the machine requires a radiation level of 1500 times bigger than a modern X-Ray.

The machine, developed by school director H J Hoffmans and local hospital director Lambertus Theodorus van Kleef from Maastricht in the Netherlands, was built with just parts you can find in a highschool, and was used for anatomical imaging experiments.

Gerrit Kemerink of Maastricht University Medical Center decided to put this device to the test for the first time in a century.

“To my knowledge, nobody had ever done systematic measurements on this equipment, since by the time one had the tools, these systems had been replaced by more sophisticated ones,” said Dr Kemerink.

The team carefully recreated the conditions which were probably used back then, but used the hand of a cadaver, because of the high level of radiation required to perform the experiment could be damaging for the subject.

“Our experience with this machine, which had a buzzing interruptor, crackling lightning within a spark gap, and a greenish light flashing in a tube, which spread the smell of ozone and which revealed internal structures in the human body was, even today, little less than magical,” they wrote.