What Light tells us about the Universe

by Mihai Andrei
in Physics
Reading Time: 5 mins read
A A
Share on FacebookShare on TwitterSubmit to Reddit

I’ve written about our incredible biological ability to gather information about our environment by sensing electromagnetic radiation. As complex as our eyes are however, light holds far more information than what we are able to perceive with our eyes. Science has given us the means to determine far more than just that there is a speck of light in the night sky.

With our modern tools and understanding we can figure out how far away that light is, how old it is, and what the emission source is made of. We have a name for this science. 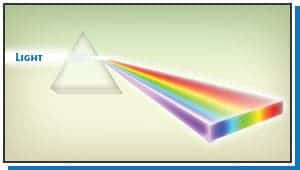 Spectroscopy is a big word, but it’s really not particularly complicated. It is spectral analysis, referring to the electromagnetic spectrum. You can examine the small visible section of it when you use a prism to order light into a rainbow. That rainbow is a lot more than a pretty physical effect. Rainbows are serious business! This is because different light sources produce different sets of wavelengths, which we can analyze and measure.

You can examine the light produced by a luminous object and determine what it is made of. This is especially because it isn’t limited to mere visible light. You can order radio waves, microwaves, infrared
waves, anything in the electromagnetic spectrum, to produce a signature.

Astronomy relies almost entirely on the analysis of light to learn about our universe. There are two basic different types of rainbows, or spectrums, that we can create to analyze matter: For reference, here is a full color spectrum if we had a light source that produced every wavelength.

1. Emission Spectrum: If you go gather light as it is emitted within a vacuum you will get a rainbow that shows all of the wavelengths emitted by that light source. Each element or molecule behaves differently and produces some wavelengths, and not others. For example, here is the emission spectrum of pure iron.

One iron atom can emit any one of those frequencies but not anything outside of its set. A huge collection of iron atoms, like in a chunk of iron, will have all of these frequencies present. If you heat your iron until it emits light and these are the only frequencies you get, then you know you’re looking at a pure product.

2. Absorption spectrum: Starlight only comes to us in an absorption spectrum. This happens because, while the core of a star emits every wavelength, the cooler matter that the light must pass through, as well as the star’s atmosphere, strip wavelengths out, leaving absorption lines that look like a bar code.

This allows scientists to determine the stars chemical composition. Here is the visible part of our solar spectrum.

Knowing our solar spectrum, we can use this as our baseline and use any further wavelength omissions to determine what else this starlight is passing through. For example, I’m sure you’ve heard of the ozone layer, which absorbs UV radiation. This can be used to figure out everything that light comes into contact with on its way to us.

That might seem like a tall order, but remember, those are only visible wavelengths, from 400 to 700 nanometers. A single electromagnetic wave can be infinitely small or as large as the universe itself. The effects of matter do not exist just in our tiny visible range, so a signature can pretty much always be detected if we can look in the right portion of the spectrum.

Recently, astronomers used a similar technique to show that there is a giant 288 billion mile wide cloud of methyl alcohol hanging out in space.

Both of these are most easily explained with the Doppler Effect. This is something you experience every day when a car drives past you. While it drives toward you it sounds higher pitched, and while it away from you it sounds lower pitched. This is because the moving object that is emitting these sound waves is moving toward waves emitted in the direction of travel, and later away from those in the opposite direction. This causes the waves to be closer together, at a higher frequency, or at a lower frequency, and closer together respectively.

Light does the same thing. It is only noticeable when an object is moving at absurdly fast speeds, near the speed of light. Astronomers can tell that the Andromeda Galaxy is hurtling toward our Milky Way Galaxy at incredible speed because its entire spectrum is shifted. We can tell that it is shifted because the aforementioned absorption lines of the galaxy’s spectrum form a similar pattern to what we see here, but moved over a little on the spectrum.

Same story for the red shift, but moved to the right on the spectrum. Redshift is special because it tells us something else as well. All objects we can observe outside our galaxy have a redshift. This is, according to Hubble’s Law, because spacetime is expanding. In the time since the light was emitted and the time it reached us, spacetime has stretched, causing light to shift toward the red along the spectrum, more or less according to the age of the light. Because the speed of light is constant and known, we can use the discernible age of the light to calculate how far it has travelled to reach us.

Daniel Harris writes for Byk Additives & Instruments, who produces color spectrometers. He is passionate about science and photophysics and enjoys writing about it.