Comets in distant solar systems could deliver oceans to exoplanets

by Mihai Andrei
in Physics, Space

Water is everywhere on Earth – that’s easy to see for anybody. But why and how it got here, that’s a dilemma that until now, hasn’t been fully answered. 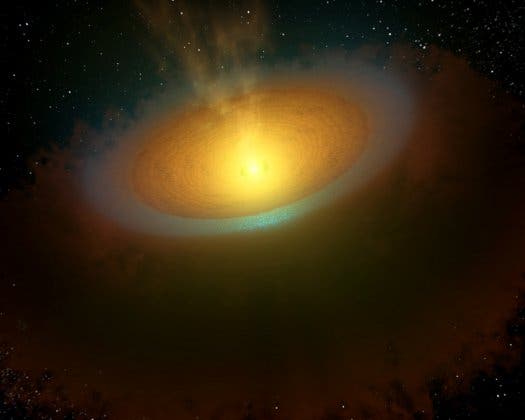 A new comet study has shown how a ring of cold water vapor can encircle a young planet, while another related one explains a hailstorm of icy bodies could be bombarding a young planet. Together, these two studies could hold the key to how comets brought ice on our planet – and show that this is not a singular event in the Universe.

In this new light, astronomers seems almost certain that water, as we see it today, was brought to Earth by comets and asteroids which originate in these cold yet water filled areas of the galaxy.

“Our observations of this cold vapor indicates enough water exists in the disk to fill thousands of Earth oceans,” said astronomer Michiel Hogerheijde of Leiden Observatory in the Netherlands.

“Scientists have long suspected there were these reservoirs of cold water vapor hiding in the outer regions of planet-forming disks, but until now we’ve only found signs of water vapor in hot regions closer to the suns,” Hogerheijde said in an interview. “Since the comets and cold asteroids are formed in the outer reaches, this was a problem for the theory that comets delivered the water to Earth. But now we have the cold reservoir in the region where comets are formed, and so the theory gets considerably stronger.”

As a separate study shows, our planet is not the only place in which these things happen. Using the cold-observing Spitzer space telescope, astrophysicists have found a dusty band around a star called Eta Corvi, a billion-year-old star system in the constellation Corvus. After studying this band, they concluded that it greatly resembles a massive collision with a large comet, or even with another planet – similar to what happened to Earth in what is now called the Late Heavy Bombardment.

During the Late Heavy Bombardment here, a cascade of frosty space rocks rained down on the planet, delivering water and other things, because at the time, our planet was to hot to retain any natural water. Earlier this month, researchers using the European Space Agency’s Herschel Space Observatory said they found the chemical isotope signature of Earth water out in the distant reaches of our solar system, suggesting that Oort Cloud comets may have been one source of this bombardment, not necessarily just asteroids. This new Spitzer study suggests the same type of bombardment is happening at Eta Corvi.