Storm elves and sprites are electric luminous fleeting phenomena that sometimes naturally occur in the upper atmosphere. A team of Spanish researchers managed to make a high speed recording of the phenomena and publish it in the Journal of Geophysical Research. Practically, sprites are electrical discharges shaped like a carrot or a column that form in the mesosphere, at about 50-80 km above the ground. Elves are electrical rings that light the base of the ionosphere, at 80-700 km. 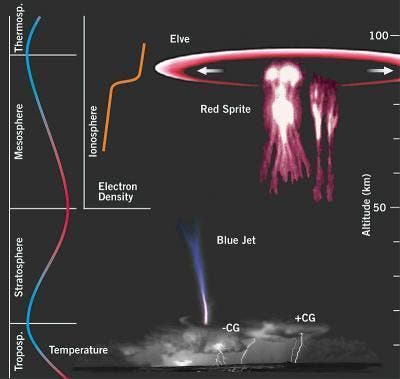 “This is the first time in Europe that we have been able to use high-speed video to detect transitory luminous phenomena taking place in the upper atmosphere — so-called sprites (in the form of a carrot or column) and elves (which are ring shaped),” Joan Montanyà, co-author of the study and a researcher at the Department of Electric Energy at the Polytechnic University of Catalonia (UPC), said.

The film showed that there are fewer sprites that form over land than over sea, and it also shed some light on their dynamics and electric structure.

“All these phenomena are related with storms, particularly winter storms, but they only appear in mesoscale convective systems (usually in large fronts), which produce lightning with high levels of energy or extreme electric currents,” explains Montanyà.