Stellar ‘cannibalism’ is the key to giant stars 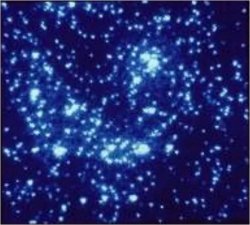 You may or may not have heard about blue stragglers; they are blue stars that are hotter and bluer than other stars with the same luminosity. Until now, it seemed that these stars defied most if not all of the standard stellar theories, but scientists now believe they have finally solved this stellar mistery.

“The origin of blue stragglers has been a long-standing mystery. The only thing that was clear is that at least two stars must be involved in the creation of every single blue straggler, because isolated stars this massive simply should not exist in these clusters.”

Found in clusters of about 100.000 stars, they raised questions from the very beginning, because all stars in the cluster have the same age, because they were born in the same time. But according to all deductions, the blue stragglers seemed to be a lot younger. So astrophysicists put their minds together and came up with theories, as Professor Alison Sills from the McMaster University adds:

“We’ve known of these stellar anomalies for 55 years now. Over time two main theories have emerged: that blue stragglers were created through collisions with other stars; or that one star in a binary system was ‘reborn’ by pulling matter off its companion.”

Due to the fact that they were unable to prove one of the theories at first, they started to figure out which one can be proven wrong. So they observed 56 globular clusters, analyzed them and came to the conclusion that the number of blue stragglers did not correlate with the predicted collision rate, thus proving wrong the theory that they are born out of a collision between two stars.

Dr Knigge says: “This is the strongest and most direct evidence to date that most blue stragglers, even those found in the cluster cores, are the offspring of two binary stars. In our future work we will want to determine whether the binary parents of blue stragglers evolve mostly in isolation, or whether dynamical encounters with other stars in the clusters are required somewhere along the line in order to explain our results.”