The world, known as HD189733b, has a deep azure hue, probably the result of molten silicate glass rain in the atmosphere, which scatters blue light. 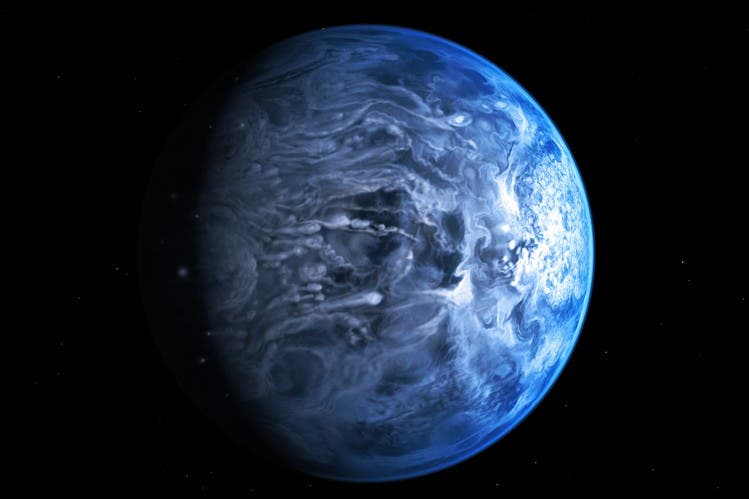 The giant planet is one of the closest and most studied in the exoplanets recently discovered; it is a sauna, a hazy hothouse swept by blow-torch winds powered by the molten silicates. It is most likely what astrophysicists call a “hot Jupiter” – a planet which originally was very similar to Jupiter, both in terms of composition and distance to its star, but then migrated much closer to its star.

Astronomers used the Hubble’s imaging spectrograph and measured both the light emitted by the star which it orbits, and the light reflected by the planet. To isolate the planet’s light, they substracted one from the other, though the process is not nearly as simple as it sounds.

“We inferred the color,” said astrophysicist Tom Evans at the U.K.’s University of Oxford, who led the study. By knowing the wavelength, “we can imagine the color the planet would have if we could look at it with our own eyes.”

It’s estimated that the temperature on the surface of the planet is a whopping 1000 C (1832 F) with winds howling at 7000 km/h (4349 miles/h). It’s atmosphere is extremely volatile, changeable and exotic, with hazes and violent bursts of evaporation. Not the habitable paradise Earth is.

So our planet appears blue from outer space due to the oceans, which absorb red and green wavelengths more strongly than blue ones. To accentuate the effect, scattered molecules of oxygen and nitrogen in the atmosphere also selectively absorb wavelengths. Mars appears red due to its rusty surface, very rich in oxide, absorbing the blue and green wavelengths and reflecting the red ones. But the color of HD 189733b comes solely from the interplay of light in its super-heated atmosphere.

The fact that astronomers were able to measure this is a stunning achievement in itself.

“We are really pushing the limits of what we can measure,” said Mr. Evans.