The world we live in is getting closer and closer to Star Trek everyday. Scientists announced today they were able to teleport special bits of light from one place to another. While this doesn’t mean that we will be (ever) able to teleport people, it involves some pretty awesome mind bending physics. 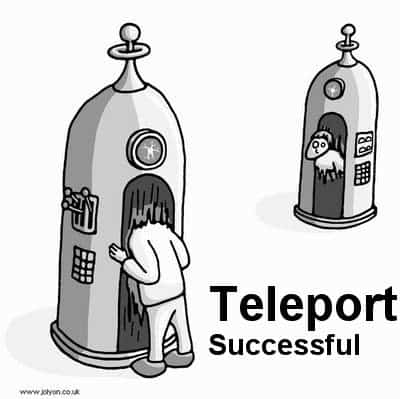 Teleportation relies on a special quantum property called entanglement, about which I told you about in an article about quantum computers. Basically, two particles can be bonded so that even though there is a large distance between them, they are able to communicate directly, and what happens to one affects the other. This property was so bizarre that it fascinated even Einstein, who named it “spooky action at distance”.

To teleport light, researchers led by Noriyuki Lee of the University of Tokyo had to destroy it in one place, and re-create it in another. This actually isn’t the first time light has been teleported in this way, but this time it’s much more complicated because the teleported light wasn’t just light, it was a special quantum state called a Schrödinger’s-cat state. Schrödinger’s cat refers to a thought experiment, that suggests that some properties of particles are not decided until an observer decides to measure them. Kind of hits your brain, but that’s pretty much how quantum mechanics works.

Even though this represents a major breakthrough in teleporting, it is extremely unlikely we will be dealing with teleporting of any life forms in the next decades.

“There is not at present a way to teleport even a bacteria,” said Philippe Grangier, of France’s Institut d’Optique, who was not involved in the new research, but who wrote an accompanying essay on the finding in the same issue of Science . “For a real cat I don’t think this will be possible in any possible future.”