by Tibi Puiu
in Physics, Technology
A A 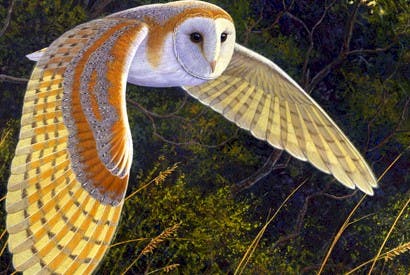 While the owl is commonly associated with wisdom, make no mistake  – it’s a vicious predator of the night. It’s main weapon is its stealth, as it silently dashes through pitch black catching pray off-guard. This remarkable ability  of noiseless flight has intrigued scientists who are looking to develop aircraft inspired by the owl.

The owl has a special plumage that allows is to fly on sly. When air airfoils travel through a shape, be it the wing of a bird or a plane, turbulence is created. The turbulence is significantly amplified towards the trailing edge of the wing, which also causes noise to occur.

Aircraft wings have hard and relatively rigid trailing edges, which coupled with extremely high speeds, causes loud noise to be generated. Researchers are now studying the wing structure of the owl to better understand how it mitigates noise so they can apply that information to the design of aircraft.

“Many owl species have developed specialized plumage to effectively eliminate the aerodynamic noise from their wings, which allows them to hunt and capture their prey using their ears alone,” Cambridge researcher Justin Jaworski said.

“No one knows exactly how owls achieve this acoustic stealth, and the reasons for this feat are largely speculative based on comparisons of owl feathers and physiology to other not-so-quiet birds such as pigeons.”

With these preliminary findings, the researchers created a computer model of wing trailing edge with elastic and porous properties and learned, indeed, that this kind of design would allow for a better noise mitigation.

“This implied that the dominant noise source for conventional wings could be eliminated,” researcher Nigel Peake said.

The findings were presented Sunday at a meeting of the American Physical Society‘s Division of Fluid Dynamics in San Diego.