by Mihai Andrei
in Inventions, News, Physics
A A

It’s been previously shown that the jellyfish are the world’s most efficient swimmers, and researchers wanted to see if they could implement some of its features into a flying machine.

New York University researchers have built a small vehicle whose flying motion resembles the movements of a jellyfish – possibly paving the way for small aerial robots which could be used for surveillance, traffic monitoring, or even search-and-rescue, while spending a minimum amount of energy.

It’s not the first time scientists have tried to mimic what’s going on in nature and implement it in a flying machine – inspiration was drawn from fruit flies and moths, for example. However, the problem is that the flapping wing of a fly is inherently unstable, raising major structural issues. Now, Leif Ristroph of NYU believes he has found the solution. 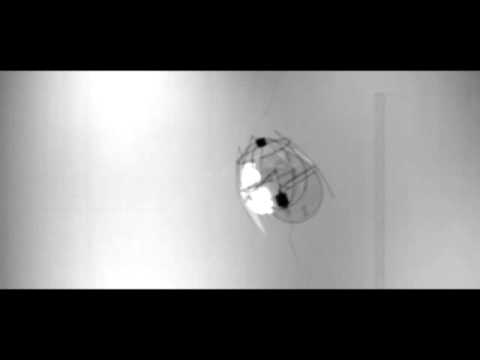 The prototype he’s created is limited: it can’t steer (pretty much like a jellyfish), and it’s relies on an external energy source – but the proof of principle has been made. What he developed is called an ornithopter (something which Dune fans might find familiar) – a flapping-wing aircraft. Ornithopters offer an alternative to helicopters in achieving maneuverability at small scales, although stabilizing such aerial vehicles remains a key challenge. The robot he developed achieves self-righting flight using flapping wings alone, without relying on additional aerodynamic surfaces and without feedback control. It measures only 8 cm, and its wings are arranged in a flower-like pattern.

The main purpose of this type of research is to make these robots as small as possible, and as simple as possible – so they can sneak in through tight spaces, without being observed and/or without disturbing.

“And ours is one of the simplest, in that it just uses flapping wings.”, says Ristroph.