by Tibi Puiu
in Physics, Technology
Reading Time: 2 mins read
A A
Share on FacebookShare on TwitterSubmit to Reddit 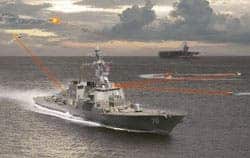 Big guns and big boats go well hand in hand most of the time, and the latest experimental weaponry unveiled by the US Navy, dubbed the Maritime Laser Demonstrator (MLD), will be sure to please any old sea dog. The diode-pumped solid-state high-energy laser weapon was developed by Northrop Grumman, and its capabilities were demonstrated On Wednesday, April 6th, when the USS Paul Foster, a decommissioned destroyer, was retrofitted with Northrop Grumman’s 15-kilowatt solid-state high-energy laser (HEL) prototype. The destroyer used its high power laser by setting fire to a small and crewless twin-engine motor boat rolling in nearby choppy water. The laser creates a high-energy burst of light by running electrons through specially designed pieces of glass or crystals – combine this in conjunction with the host ship’s radar and navigation systems and you’ve got yourself a deadly and precise weapon.

“This is the first time a HEL, at these power levels, has been put on a navy ship, powered from that ship and used to defeat a target at range in a maritime environment,” said Peter Morrison, program officer for the U.S. Office of Naval Research (ONR).

Other tests of solid state lasers for the Navy have been conducted from land-based positions. Having access to a HEL weapon will one day provide a warfighter with options when encountering a small-boat threat, Morrison said.

The eventual goal of the $98M USD Maritime Laser Demonstrator (MLD) is to install 100-kilowatt lasers on ships! Yes, this means in that in the not so distant future (2020ish), the navy is planning on developing war tech capable of cutting through 2,000 feet of steel per second and offering battle-sinking power in an instant.