by Mihai Andrei
in Electronics, Physics, Space
Reading Time: 2 mins read
A A
Share on FacebookShare on TwitterSubmit to Reddit 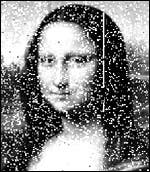 NASA announced in a recent statement that they have beamed an image of the legendary painting to the Lunar Reconaissance Orbiter, a spacecraft currently orbiting the Moon, to test communication abilities with the satellite, using laser technology.

The image was first converted to a suitable digital format, after which it traveled just less than 400.000 km to the satellite.

Until now, only radio waves have been used to track and communicate with objects that have traveled beyond our planet’s orbit. The LRO is the only satellite that’s been orbiting around a celestial body other than Earth to be contacted with laser.

“Because LRO is already set up to receive laser signals through the LOLA instrument, we had a unique opportunity to demonstrate one-way laser communication with a distant satellite,” said Xiaoli Sun, a scientist at NASA Goddard and lead author of the Optics Express paper, that describes the work.

The Mona Lisa was beamed in black and white, being divided into an array of 152 pixels by 200 pixels, with each one of them having a shade of gray assigned as a number from 0 to 4096. Laser pulses were used to make the transmission, and each pulse was fired in one of 4,096 available time slots. The transmission took place at a speed of about 300 bits per second – not quite what you want to see when you’re downloading. Astronomers hope this method will be developed and perfected quickly.