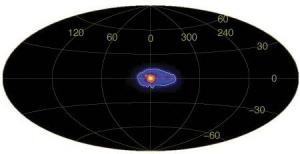 Antimatter is a fascinating story; basically nobody knows for sure what it could do and scientists have been trying to understand it for years. The artificial production of atoms of antimatter (specifically antihydrogen) first became a reality in the early 1990s. For example an atom of antihydrogen is composed of a negatively-charged antiproton being orbited by a positively-charged positron. But still the clue that our old Milky Way galaxy gave us is relevant and important.

The thing is that the proton traveling at relativistic speeds and passing close to the nucleus of an atom has the potential to force the creation of an electron-positron pair. The shape of the mysterious cloud of antimatter in the central regions of the Milky Way has been revealed by ESA’s orbiting gamma-ray observatory Integral.

These observations almost eliminated the idea that the chances that the antimatter is coming from the annihilation or decay of astronomical dark matter. Georg Weidenspointner at the Max Planck Institute for Extraterrestrial Physics and an international team of astronomers made the discovery using four-years-worth of data from Integral.

“Simple estimates suggest that about half and possibly all of the antimatter is coming from the X-ray binaries,” says Weidenspointner. The other half could be coming from a similar process around the galaxy’s central black hole and the various exploding stars there. He points out that the lopsided distribution of hard LMXBs is unexpected, as stars are distributed more or less evenly around the galaxy. More investigations are needed to determine whether the observed distribution is real.