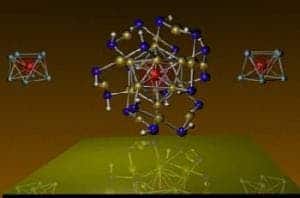 Virginia Commonwealth University managed to discover what they have called a ‘magnetic superatom‘, a stable cluster of atoms that can ‘impersonate’ various elements from the periodic table, that could be put to use in numerous fields, especially for biomedical purposes and to create molecular devices for the next generation of computer memory.A team from the

This cluster consists of one atom of vanadium and eight cesium. Together, they act like a tiny magnet that mimics a single manganese atom in magnetic strength but allows electrons with certain spin orientations to flow through the surrounding shell atoms.

The team was led by Shiv N. Khanna, Ph.D., professor in the VCU Department of Physics, together with VCU postdoctoral associates J. Ulises Reveles, A.C. Reber, and graduate student P. Clayborne, and collaborators at the Naval Research Laboratory in D.C., and the Harish-Chandra Research Institute in Allahabad, India; they teamed up together to go against what can only be called a titanic quest, namely examining the magnetic and electronic properties of the clusters.

They found out that the eight cesium atoms provide extra stability due to a filled electronic state. Also, when one atom combines with others, it tends to lose or gain valence until it reaches stable configuration. As Khanna points out:

“An important objective of the discovery was to find what combination of atoms will lead to a species that is stable as we put multiple units together. The combination of magnetic and conducting attributes was also desirable. Cesium is a good conductor of electricity and hence the superatom combines the benefit of magnetic character along with ease of conduction through its outer skin,” Khanna said. A combination such as the one we have created here can lead to significant developments in the area of “molecular electronics,” a field where researchers study electric currents through small molecules. These molecular devices are expected to help make non-volatile data storage, denser integrated devices, higher data processing and other benefits,” he said.