On Mars, auroras are blue and visible to the naked eye. Here’s a simulation

Mars has auroras too, and in addition to the red and green tinted Northern Lights here on Earth, these also come in blue. According to NASA, these should be visible to the naked eye if a Martian astronaut were to look to the sky from one of the two poles.

Mars has auroras too, and in addition to the red and green Northern Lights here on Earth, they also come in blue. According to NASA, these should be visible to the naked eye for a Martian astronaut if he were to look to the sky from one of the two poles.

Auroras are nature’s own dynamic light show. These are created by charged particles from the Sun travelling along the Earth’s magnetic field lines and exciting our atmosphere. In the North these displays are called  aurora borealis (or the northern lights), named after the Roman goddess of dawn, Aurora, and the Greek name for the north wind, Boreas, by Galileo in 1619. The physical interaction that produces the lights was first demonstrated by Norwegian physicist Kristian Birkeland almost a century ago when he produced his own auraras. In his world famous experiment, he demonstrated how the lights form around magnetic spheres inside a small vacuum chamber. A modern day version of this experiment is called the  Planeterrella, whose inner workings are explained in this great video produced by University of Leicester. 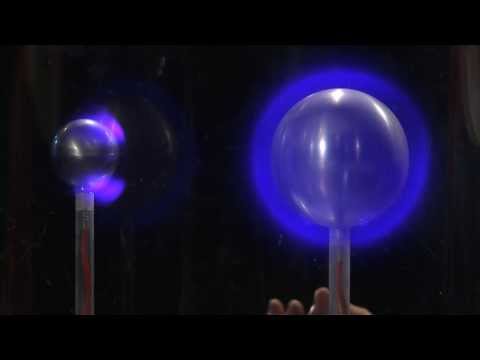 Using the same polar light simulator, researchers at NASA produced the Northern Lights equivalent in a Mars environment. First, they changed the magnets to be more akin to the Martian planet. While Planeterrella uses a vacuum pump to simulate the thin atmosphere where the charged particles interact with the magnetic field lines, it does not pump out all of the air, leaving a fraction behind. In this case, more CO2 was pumped to represent the Martian atmosphere. Now, I know what you’re thinking: Mars doesn’t have a magnetic field! Well, that’s not entirely true. According to NASA, there are still “local spots of increased magnetic fields, called crustal magnetic anomalies, [..] concentrated in the southern hemisphere, where aurorae are predicted to occur.”

Scientists first suspected auroras might appear in the Martain sky based on date from the SPICAM imaging instrument on the European Space Agency’s Mars Express. Later on, in April, the Maven mission confirmed this hypothesis when the probe spotted an aurora  at low altitudes in the northern hemisphere, even though these should be most prominent in the southern hemisphere.