by Tibi Puiu
in Physics, Studies
Reading Time: 4 mins read
A A
Share on FacebookShare on TwitterSubmit to Reddit 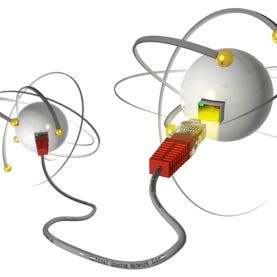 Quantum technology is the future, no doubt. The impact of computing devices based on quantum effects finally entering service would be vast and of immense positive consequence to the scientific world, and hence mankind, comparable with the invent of the microchip. While this future might still seem far fetched, judging from the number of successful efforts we’ve witnessed in the field, in the past years alone, I personally believe that we’ll be there someday, albeit at a steady pace. The latest high impact breakthrough came from the Max Planck Institute in Germany, where scientists have successfully managed to set-up a quantum-based communication network between two nods, consisting of two rubidium atoms and a photon.

“This approach to quantum networking is particularly promising because it provides a clear perspective for scalability,” says professor Gerhard Rempe, director at the Max Planck Institute of Quantum Optics.

Physicists have proven previously that a quantum bit, or qubit, could be transmitted on single emitted photons, however getting the photons and atoms to communicate with one another has been a challenge, because of still very low efficiency. The researchers managed to overcome this setback by applying a solution proposed more than 15 years ago – optical cavities. Thus, on each node mirrors would reflect back the photos encoded with quantum information past the rubidium atom tens of thousands of times, boosting the chances of an interaction.

“During this time, there’s enough time to really do this information exchange in a reliable way,” says M.P.Q. physicist Stephan Ritter, one of the study’s authors. “The cavity enhances the coupling between the light field and the atom.”

The M.P.Q. group put their prototype network through a series of tests – transferring a qubit from a single photon to a single atom and reversing the process to transfer information from an atom onto a photon, traveling along a 60-meter fiberoptic cable between the the researchers’ two labs. Thus, each node was capable of sending, receiving or storing quantum information and proved to be a scalable system.

Why is this important?

Communicating between quantum storage mediums will become a necessity once the first generation of quantum computers is functional; a quantum network becomes thus indispensable. Also, quantum networks will offer the most sophisticated form of secure networking,  as cryptography protocols based on the exchange of qubits would be more secure than traditional encryption methods.

What I find most interesting, though, is what benefits physicists may derive from quantum entanglement. This form of superposition of states causes two particles share correlated properties, so if one of them is altered, the other bound particle will instantly alter its state as well, even though its millions of miles away from its sister particle – one of the most peculiar phenomena in physics. The Max Planck quantum network prototype also proved that it can  be used to entangle two distant atoms. Conventional telecommunications is made via radio waves traveling at the speed of light. A one way communication from Earth to Mars takes 20 minutes – you can imagine the kind of conversations potential astronauts on Mars might have with the people back home, they’d very much resemble theater monologues. What if we travel even farther down? Well, the lag will only intensify. A quantum network based on entangled particles could instantly transmit information between points no matter the distance between them, even billion of billions of billions of miles, or so goes the theory at least – information quantum transportation. Now this is really far out, for our time and age at least.

“We have realized the first prototype of a quantum network. We achieve reversible exchange of quantum information between the nodes. Furthermore, we can generate remote entanglement between the two nodes and keep it for about 100 microseconds, whereas the generation of the entanglement takes only about one microsecond,” says Ritter.

Ritter and co.’s prototype is still in its early stages of development, with a transfer of a quantum state success rate of only  0.2 percent of the time, but this only goes to prove that there’s an enormous room for improvement.

“Everything is at the edge of what can be done,” he says. “All these characteristics are good enough to do what we’ve done, but there are clear strategies to pursue to make them even better.”

The findings were reported in a recent issue of the journal Nature.