Peanut allergy is one of the most common food allergies.

by Melvin Sanicas
in Health & Medicine, News, Science
A A

Peanut allergy is one of the most common food allergies. Peanuts are not the same as tree nuts (almonds, cashews, walnuts, etc.), which grow on trees. Peanuts grow underground and are part of a different plant family, the legumes. Other examples of legumes include beans, peas, lentils and soybeans. Being allergic to peanuts does not mean you have a greater chance of being allergic to another legume.

The most severe allergic reaction to peanuts is anaphylaxis — a life-threatening whole-body response to an allergen. Symptoms include impaired breathing, swelling in the throat, a sudden drop in blood pressure, pale skin or blue lips, fainting and dizziness. Unless treated immediately with epinephrine, typically administered in an auto-injector, anaphylaxis can be fatal. Less severe symptoms include: itchy skin or hives, which can appear as small spots or large welts, an itching or tingling sensation in or around the mouth or throat, nausea, a runny or congested nose.

There are several misconceptions about peanut allergies. A peanut is a legume (belonging to the same family as soybeans, peas and lentils), not a tree nut. And while it was previously believed that an allergy to peanuts was lifelong, research by the National Institutes of Health shows that about 20% of individuals with a peanut allergy eventually outgrow it.

Evidence indicates early introduction of infant-safe peanuts reduces the risk of developing peanut allergies, according to a clinical report from the American Academy of Pediatrics (AAP). This is an update to the 2008 AAP report, which found “insufficient data to support a protective effect of any dietary intervention for the development of atopic disease,” reported Frank Greer, MD, FAAP, of the AAP Committee on Nutrition, Section on Allergy and Immunology, and the University of Wisconsin-Madison, and colleagues. 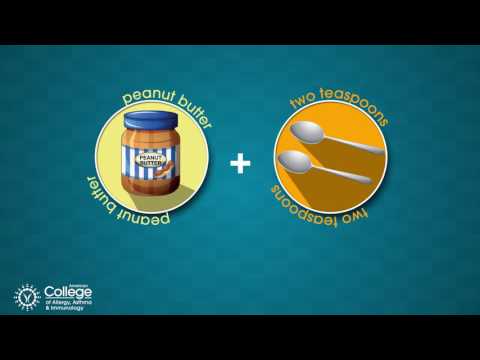 Peanut allergies are rising in prevalence with roughly 1.2 million U.S. children and teens affected as of last year. The AAP endorsed the NIAID-sponsored guidelines shortly after they were published in 2017, and is now updating their clinical guidance with this report.

Guidelines regarding earlier introduction of peanuts were primarily based on the results of the Learning Early About Peanut Allergy (LEAP) trial, in which introducing peanuts as early as 4 months reduced the number of peanut allergies by about 86% in a sample of over 500 infants, Greer and colleagues noted. The same reduction was not seen with egg allergies, and thus the evidence to support the early introduction of eggs is “less clear.”