Almost 40% of people aged 65 to 80 are sexually active, but few are open about it

Older people have sex too, but they don't talk about it to their doctors, which may be a problem.

Many believe that once you reach a certain age, there’s no more dancing in the sheets — but sex isn’t just for the young and restless. Case in point, four in ten people between ages of 65 and 80 are sexually active, according to recent findings by the National Poll on Healthy Aging. The poll highlights gender and health-related divides on key aspects of sexual health, and also informs that the elderly rarely talk about sex with their doctors — this may be problematic since many older adults consume over-the-counter supplements that might interact with their medication.

The poll was conducted by the University of Michigan Institute for Healthcare Policy and Innovation on a nationally representative sample of 1,002 people. Among the key findings: 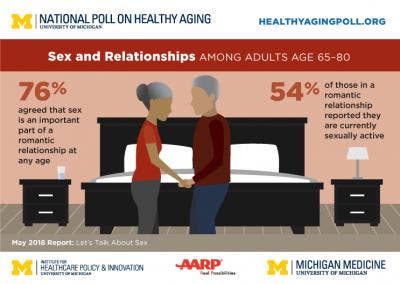 “Sexual health among older adults doesn’t get much attention but is linked closely to quality of life, health and well-being,” says U-M’s Erica Solway, Ph.D., co-associate director of the poll. “It’s important for older adults and the clinicians who care for them to talk about these issues and about how age-related changes in physical health, relationships, lifestyles and responsibilities such as caregiving, affect them.”

Solway and colleagues learned that there can be sharp differences in the respondents’ sex lives depending on their health, age, and gender. For instance, 45 percent of the respondents who are in excellent, very good, or good health reported being sexually active but only 22 percent of those who are in fair or poor health responded the same way. What’s more, only 28 percent of those with fair or poor health said they were extremely or very satisfied with their sex lives. 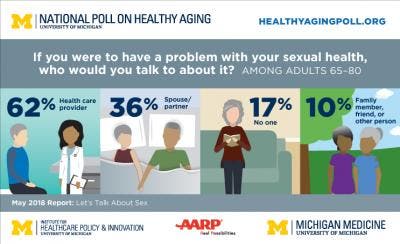 Women were less likely than men to be sexually active (31 percent vs 51 percent of men). On the upside, women were more likely to be extremely or very satisfied with their sex lives than men. About 84 percent of older men said sex was an important part of a romantic relationship, 69 percent of older women agreed with that statement. The biggest gender difference, however, is in term of interest in sex. Half of the men aged 65 to 80 said they were extremely or very interested in sex whereas only 12 percent of women in the same age range agreed. Perhaps this may be due to the fact that men continue to be sexually reproductive whereas women of the same age are now infertile.

“This survey just confirms that the need for and interest in sexual intimacy doesn’t stop at a certain age,” says Alison Bryant, Ph.D., senior vice president of research for AARP. “Although most older adults say that they would talk with their doctor about sexual concerns, health care providers should routinely be asking all of their older patients about their sexual health and not assume that bringing up the issue will offend or embarrass them.”