‘Wonder drugs’ might prevent all forms of dementia. One of the drugs is already safe for humans

The drugs were manufactured to treat different conditions but they also seem to block an important pathway linked to brain cell death.

by Tibi Puiu
in Mind & Brain, News
A A

Two drugs — one a licensed antidepressant, the other an anti-cancer substance currently in trial — could halt the growth of misfolded proteins that trigger Alzheimer’s or Parkinson’s. The side effects are minimal according to tests ran on mice and seeing how one of the drugs is already licensed and safe for humans, clinical trials meant to gauge the efficacy of the drugs for preventing dementia in humans could start very soon. The two compounds are considered the most promising weapons against dementia we’ve found to date.

Worldwide, there are some 47.5 million reported cases of dementia, with 7.7 new cases reported every year. Dementia usually onsets at old age. It affects memory, thinking, orientation, comprehension, calculation, learning capacity, language, and judgement. Alzheimer’s disease is the most common form of dementia and may contribute to 60–70% of cases.

Most neurodegenerative diseases such as Alzheimer’s or Parkinson’s are caused by the buildup of misfolded proteins in the brain. Their presence triggers a natural defense mechanism which switches off the production of new proteins in brain cells. In time, the brain, specifically the cerebral cortex, literally shrinks, connections between brain cells are severed and fewer neurotransmitter chemicals are available to relay signals between brain cells.

In 2013, scientists from the UK Medical Research Council (MRC) made waves after they showed a drug could switch the vital protein production back on. The mice’s brain cells stopped dying but later the experimental drug was found to be toxic to the pancreas. Yet another promising solution to an incurable disease which, sadly, was found to be unsuitable for humans.

But that’s not the case with trazodone, which is already taken by patients with depression, and dibenzoylmethane, a compound being trialed as an anti-cancer drug. The two drugs were found to be effective at blocking dementia onset after a team working at the same MRC screened 1,040 compounds. Each compound was first tested on C. elegans worms, which have functioning nervous systems, then in mammalian cells. This initial round produced a short-list of candidate compounds which could be tested in mouse models of prion disease and frontotemporal dementia.

Of all the drugs, the trazodone/dibenzoylmethane pair was found to be the most effective at blocking the pathway linked to brain cell death caused by prion disorders. Of the two, trazodone is not only a licensed drug but also a treatment for the symptoms of patients in later stages of dementia.

“We know that trazodone is safe to use in humans, so a clinical trial is now possible to test whether the protective effects of the drug we see on brain cells in mice with neurodegeneration also applies to people in the early stages of Alzheimer’s disease and other dementias,” said Professor Giovanna Mallucci, who led the team from the Medical Research Council’s Toxicology Unit in Leicester and Cambridge University.

“We could know in two to three years whether this approach can slow down disease progression, which would be a very exciting first step in treating these disorders.” 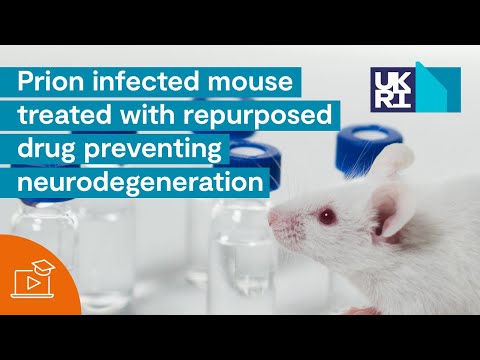 Despite all of these advantages, people shouldn’t get their hopes up too much. The drugs may stop dementia in mice but there’s nothing to guarantee it will also work in humans. It’s rare to find such promising drugs, however, that are already at least partially vetted for human consumption.

“We’re excited by the potential of these findings. They show that a treatment approach originally discovered in mice with prion disease might also work to prevent the death of brain cells in some forms of dementia. This research is at a very early stage and has not yet been tested in people – but as one of the drugs is already available as a treatment for depression, the time taken to get from the lab to the pharmacy could be dramatically reduced,” said Dr Doug Brown, Director of Research and Development at the Alzheimer’s Society in a statement.