Why Swiss cheese has holes (it’s not the mice)

A team at Agroscope, a Swiss agricultural research center, reports what lends the Swiss cheese its uncanny hole-ridden appearance: tiny pieces of hay that find their way into the milk.

A team at Agroscope, a Swiss agricultural research center, reports what lends the Swiss cheese its uncanny hole-ridden appearance: tiny pieces of hay that find their way into the milk.

In 1917, Chemist William Clark proposed the Swiss cheese holes were made by CO2 bubbles eliminated by bacteria. To explain why the holes formed away from bacteria growth locations, Clark wrote at the time:

“There is really little reason, as well as little evidence, to support the assumption that the gas necessarily separates as gas bubbles where it is produced. It is not at all irrational to suppose that the gas, having first saturated the cheese mass, separates at advantageous points which have no necessary relation to those localities rich in bacterial growth. In other words we may suppose a process similar to the growth of crystals to take place,” he wrote.

For the past 15 years, however, Swiss cheese has been made with fewer and fewer holes in it. The only significant thing that has changed since is how the cows are milked, which suggests that the bacteria has nothing, in particular, to do with the holes in the tasty cheese.

At Agroscope, researchers looked at age-old milking methods in barns versus fully-automated, industrial milking systems which are much cleaner and mandated by regulations nowadays. When the cow is milked, “microscopically small hay particles” make their way into the substance and the cleaner the milking process the less hay you’ll find in the milk. In a series of tests, by adding various amounts of hay particles in the milk, the Swiss researchers could control the number of holes in the cheese.

“It’s the disappearance of the traditional bucket” used during milking that caused the difference, said Agroscope spokesman Regis Nyffeler. Now you know. 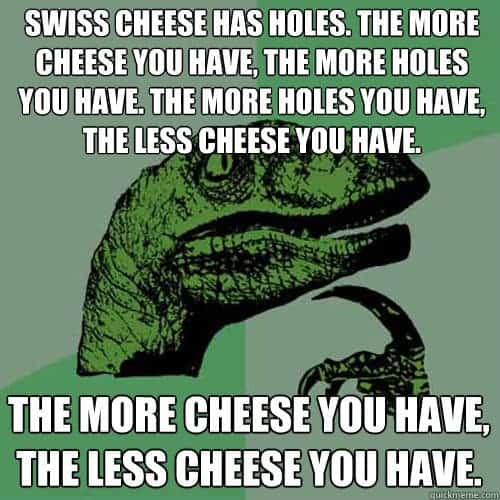