Though Earth’s iron-rich core is subjected to a dizzying temperature in excess of 5,427° C ( 9,800° F), it stays solid. This has always been a mystery for geologists and geophysicists but novel research might have finally settled the debate. According to Swedish physicists from the KTH Royal Institute of Technology, the iron inside the core stays crystallized because “it exhibits a pattern of atomic diffusion.”

You might be wondering how we know Earth’s core is solid in the first place. Well, some clever people realized a long time ago that they could use acoustic physics to infer properties of objects obscured by 6,353 kilometers of crust, mantle, and outer core. In a fluid, such as a gas or liquid, you can get shear waves when a pressure wave hits a surface. While a pressure wave’s wobble is always in the same direction, a shear wave is like a wave on a string (it’s at a right angle with the wave’s direction of propagation). When waves created by earthquakes hit the liquid outer core then travel through the inner core, scientists record an extra wave going off at right angles which can only be explained be a shear wave. The only explanation is that core must be solid.

This solid inner core which is nearly the size of the moon is mostly made of crystallized iron. Being a metal, iron’s atomic crystal structure is packed at room temperature and pressure in a body-centred cubic (BCC) phase — an architecture with eight corner points and a center point. At extremely high pressures, the crystalline structure transforms into 12-point hexagonal forms known as a close-packed (HCP) phase. Seeing how Earth’s core is subjected to pressures 3.5 million times higher than atmospheric pressure, never mind temperatures more than 5,000 degrees K higher, it would be sensible to assume an HCP, liquid phase. But evidence points otherwise.

Using a supercomputer, Anatoly Belonoshko, a researcher in the Department of Physics at KTH, and colleagues, explained for the first time what’s going on. In short, characteristics of BCC iron once thought to render it unstable at high pressure actually cause the opposite effect — it makes the BCC crystalline phase even more stable.

“It appears that the experimental data confirming the stability of BCC iron in the Core were in front of us – we just did not know what that really meant,” he added, alluding to observations collected three years ago at Livermore Lawrence National Laboratory in California.

At high pressure but low temperature, the BCC phase is unstable as the crystalline planes slide out of the cubic structure. However, analysis of the computational samples suggests at that at high temperatures, these structures stabilize much like cards in a deck.

“The sliding of these planes is a bit like shuffling a deck of cards,” says Belonoshko. “Even though the cards are put in different positions, the deck is still a deck. Likewise, the BCC iron retains its cubic structure. The BCC phase goes by the motto: ‘What does not kill me makes me stronger.’ The instability kills the BCC phase at low temperature, but makes the BCC phase stable at high temperature.”

The data also revealed the most accurate composition of the inner core to date:  96 percent iron, the rest nickel and possibly light elements.

Belonoshko also said that the shuffling or diffusion of atoms can also explain another inner core mystery: why seismic waves travel faster between the Earth’s poles than through the equator. In an anisotropic material, its properties change with direction along the object. Like a grain of wood, Earth’s inner core also has a texture that changes with direction, being anisotropic.

“The unique features of the Fe BCC phase, such as high-temperature self-diffusion even in a pure solid iron, might be responsible for the formation of large-scale anisotropic structures needed to explain the Earth inner core anisotropy,” he says. “The diffusion allows easy texturing of iron in response to any stress.”

Findings appeared in the journal  Nature Geosciences. Check the video below for a visual explanation of what’s going on inside our planet’s core. 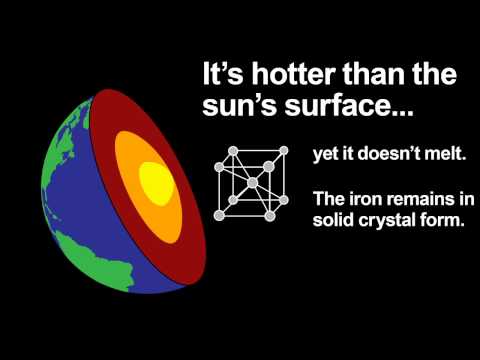