What are the layers of the Earth?

Broadly speaking, the Earth has four layers: the solid crust on the outside, the mantle and the core -- split between the outer core and the inner core.

Broadly speaking, the Earth has four layers: the solid crust on the outside, the mantle and the core — split between the outer core and the inner core.

The crust is everything we can see and study directly. The thinnest layer of the Earth, the crust still measures about 40 km on average, ranging from 5–70 km (~3–44 miles) in depth. But at the scale of the planet, that’s less than the skin of an apple.

These plates “float” on the soft, plastic upper mantle.

The mantle is also divided into several layers, based on seismologic properties. The upper mantle extends from where the crust ends to about 670 km. Even though this area is regarded as viscous, you can also consider it as formed from rock – a rock called peridotite to be more precise. Below that, the lower mantle extends from 670 to almost 2900 kilometers below the surface.

It’s basically accepted by now that the mantle is not in a steady state, but rather in a state of constant motion. There is a general convective circulation, with hot material upwelling towards the surface and cooler material going deeper. It is generally thought that this convection actually directs the circulation of the plate tectonics in the crust.

Most earthquakes are formed on the surface, in the crust; as the plates ebb and tow tension creates, and when that tension releases or when something breaks you have an earthquake. However, earthquakes can also happen in the mantle, and at those pressures you can’t possibly talk about faulting and breaking. In subduction areas, where one plane goes beneath another, earthquakes have been observed at depths of up to 670 km. The mechanism around these earthquakes is still not well understood, but one of the theories is that some minerals shift from one state to another, changing their volume in the process. This change in volume can lead to earthquakes.

However, we are getting closer and closer to understanding the mantle – even without getting there. In recent times, researchers have gone close to replicating the high temperature/pressure in the mantle, and high-level computer models are also revealing some of its secrets.

We sometimes refer to the core as one thing, although the inner core and the outer core are fundamentally different – not layers of the same thing. The  “solid” inner core has a radius of ~1,220 km, while the “liquid” outer core extends up to a radius of ~3,400 km.

Wait, if we couldn’t go to the mantle, how could we possibly know one is solid and one isn’t? Well, as before, the answer is the same: seismic waves (we’re almost there).

It’s generally believed that the inner core is growing very slowly – as the core cools down, more of the outer core solidifies and becomes a part of the inner core. The cooling rate is very low thought, at about 100 degrees Celsius per billion years. However, even this slow growth is thought to have a significant impact in the generation of Earth’s magnetic field by dynamo action in the liquid outer core.

Rather interestingly, the inner core seems to be asymmetric on the East-West line. There is a model that explains this asymmetry with melting on one side and crystallization on the other. This anomaly also likely affects the Earth’s magnetic field, creating an asymmetry on the crystallizing side.

The outer core is a low viscosity fluid (about ten times the viscosity of liquid metals at the surface) – “liquid” is a rather improper term. Because it has a very low viscosity, it is easily deformed and malleable. It is the site of violent convection. It is also thought to suffer very violent convection currents – hey, and guess what? The churning of the outer core and its relative movement is responsible for the Earth’s magnetic field.

The hottest part of the outer core is actually hotter than the inner core; temperatures can reach 6,000° Celsius (10,800° Fahrenheit)—as hot as the surface of the sun.

How we know about the Earth’s layers

We can only see very small fractions of the Earth’s crust, which itself is a small fraction of our planet – so how can we know all these things?

Well, the best source of information we have is seismic waves. When an earthquake takes place, it releases pressure waves which then propagate throughout the entire planet. These waves carry with them information from the layers they pass through – including the mantle and the core. By studying the propagation of By studying the propagation of waves through the Earth we can learn about the physical properties of the Earths interior. For example, some waves propagate only through solid mediums, while others propagate through both solid and liquid mediums – so they can show if some layer is solid or not. Seismic waves sample narrow swaths of the Earth’s interior so we can also isolate the information they carry; by analyzing several earthquakes recorded at several seismic stations, we can produce a CAT scan-like analysis of an area. 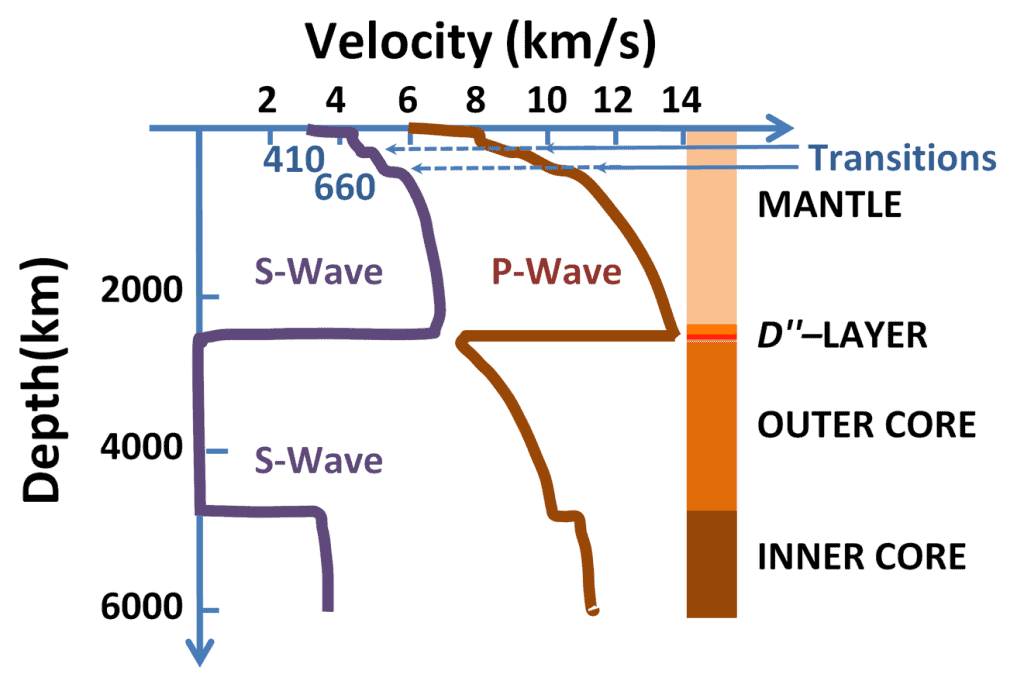 Furthermore, modern simulations in the lab showed how minerals likely behave at those temperatures and pressures, and we also have indirect gravitational and magnetic information, as well as studies on magma and crystals found on the surface – but the bulk of the information comes from global seismology. It’s simply amazing that without even going close to it, we can know so much about the layers of the Earth.