Seismic waves can either be body waves or surface waves -- but the full story is far more complex.

Generally speaking, there are two types of waves: body waves (which comprise of P or Primary waves and S or Secondary waves) and surface waves (Love and Rayleigh). But the long story is more complex — and much more interesting. 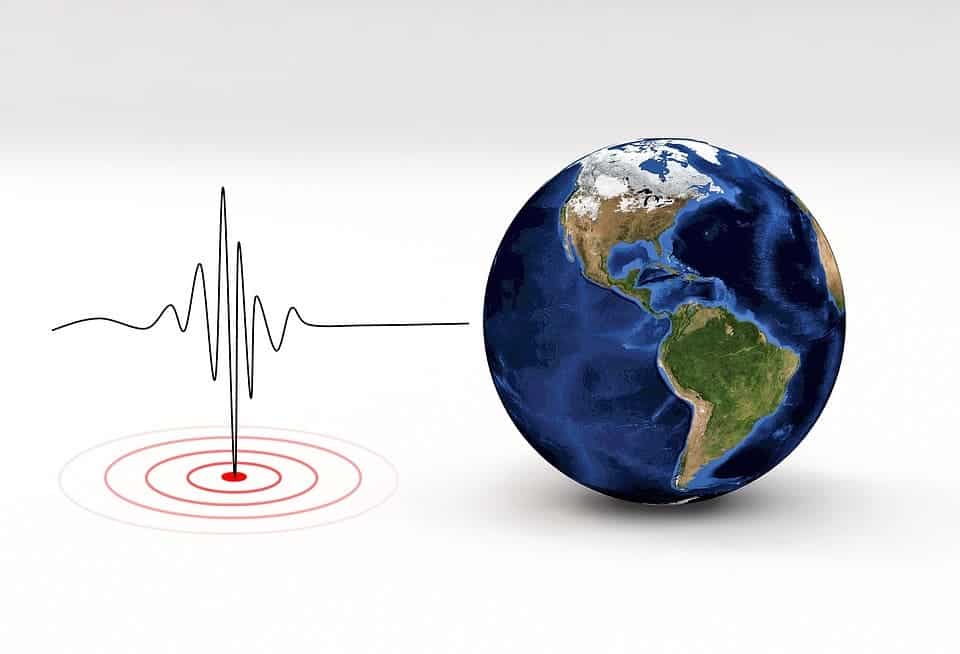 Seismic waves are produced by earthquakes, volcanic eruptions, magma movement, large landslides and large man-made explosions. They are a form of acoustic wave, just like sound waves. The vast majority of them are associated with natural earthquakes.

In the broadest sense, an earthquake is just what the name suggests — any shaking of the Earth’s interior. Earthquakes can happen for a variety of reasons, but by far the most common cause is tectonic.

The Earth’s crust (the outermost layer) is split into rigid plates, all of which are moving relative to each other. The movement produces more and more stress on the ground until something eventually breaks along what’s called a geological fault. This is why, if you overlay a global tectonic plate map and a global earthquake map, you’ll see an almost perfect overlap between tectonic edges and temblors.

Volcanoes can also produce earthquakes, though they are generally less impactful than tectonic earthquakes.

Man-made explosions (for instance, atomic testing) can also produce earthquake-type features which produce seismic waves and can be detected — this is what allows remote monitoring of nuclear explosions.

For some earthquakes, the cause remains poorly understood, particularly in the case of intraplate tectonics (inside tectonic plates, not on the edges). Another cause of some very deep earthquakes is the so-called mineral phase change: atoms in minerals such as olivine can change their positions to become more tightly packed. Their chemistry remains the same, but their volume and density change dramatically if an equilibrium is reached. This requires very particular conditions to happen, but if it does happen, it creates a type of “anti-crack” and can generate massive, deep earthquakes.

Why seismic waves are important

Studying and understanding seismic waves is more than a theoretical pursuit — it’s very important for a number of reasons, which flow quite logically.

A historical map of epicenters gives a good starting point to assess the likelihood of future earthquakes and can serve as a basic preparation, allowing city planners and residents to prepare for the likelihood of seismic events. Naturally, this leads to the next reason for studying seismic earthquakes.

Assessing hazards basically aims to predict the potential ground shaking intensity from future earthquakes. This can’t be done from studying seismic waves alone, it requires a lot of local geology input and external considerations (for instance, earthquakes can also cause indirect damage though processes such as landslides) — but seismology is the first step.

Precise earthquake prediction (pinpointing the exact time and place of a future earthquake) is not possible and will not be possible for the foreseeable future due to the sheer complexity of the problem — but this doesn’t mean that we can’t make some guesses. Scientists predict earthquakes in odds and intervals, not in exact values. A noteworthy situation is the estimation of volcanic hazard: volcano eruptions are typically predicted by a swarm of small earthquakes, which is why most of the world’s active volcanoes are surrounded by seismic detectors.

If you want to look for the best seismic engineers in the world, you’ll probably find them in places like Chile or Japan. Why? Because they need to be good, given that those are some of the seismically active places in the world.

Engineering seismology lays the bases for calculating seismic hazard, and it makes a big difference — for instance, Japan’s sophisticated engineering and strongly-enforced building codes have probably saved thousands of lives. The western coast of the US, for instance, is also quite earthquake-prone due to the San Andreas fault, and despite calls for better preparation, the area remains vulnerable.

If you live in an earthquake-prone area, you probably have access to one type of “early” earthquake alert. Typically, these alerts can let you know when the earthquake is coming 30-60 seconds ahead of time — it’s not a lot, but in some cases, it could make all the difference.

In case you’re wondering how this is done, it has everything to do with the velocity of different seismic waves: if you recall, P-waves travel much faster than surface waves, but don’t do any real damage — the “30 seconds” are the interval between the arrival of the P waves and that of the surface (Love and Rayleigh) waves.

If you’ve ever wondered why nations can’t just hide nuclear tests, it has a lot to do with seismic waves.

Man-made explosions generate types of waves which can be detected worldwide, and it’s essentially impossible to hide any massive explosion from the entire world (although seismic waves alone can’t reveal the nuclear or non-nuclear nature of the explosion).

Studying the Earth with seismic waves

Another completely different reason why it makes a lot of sense to study seismic waves is to study the Earth’s interior.

Since we’re kids, we’re taught that the Earth has a crust, a mantle, and a core… but how do we know that? The answer is, of course, through seismic waves.

Geologists use seismic waves to determine the depths and structures of different Earth layers. For instance, P waves travel through all types of medium, whereas S waves only travel through solid waves — this was used to deduct the fact that the mantle acts as a fluid (it’s not really a liquid, but it’s not exactly a solid either — think of it as extremely thick honey).

Seismic waves also get reflected and refracted when they travel from one medium to another. These transitions are governed by differences in density, which is why we know so much about the density of many structures deep inside the Earth. An interesting consequence of this property is that earthquakes have a “blind spot”: an area of the world where waves coming from them can’t be detected. 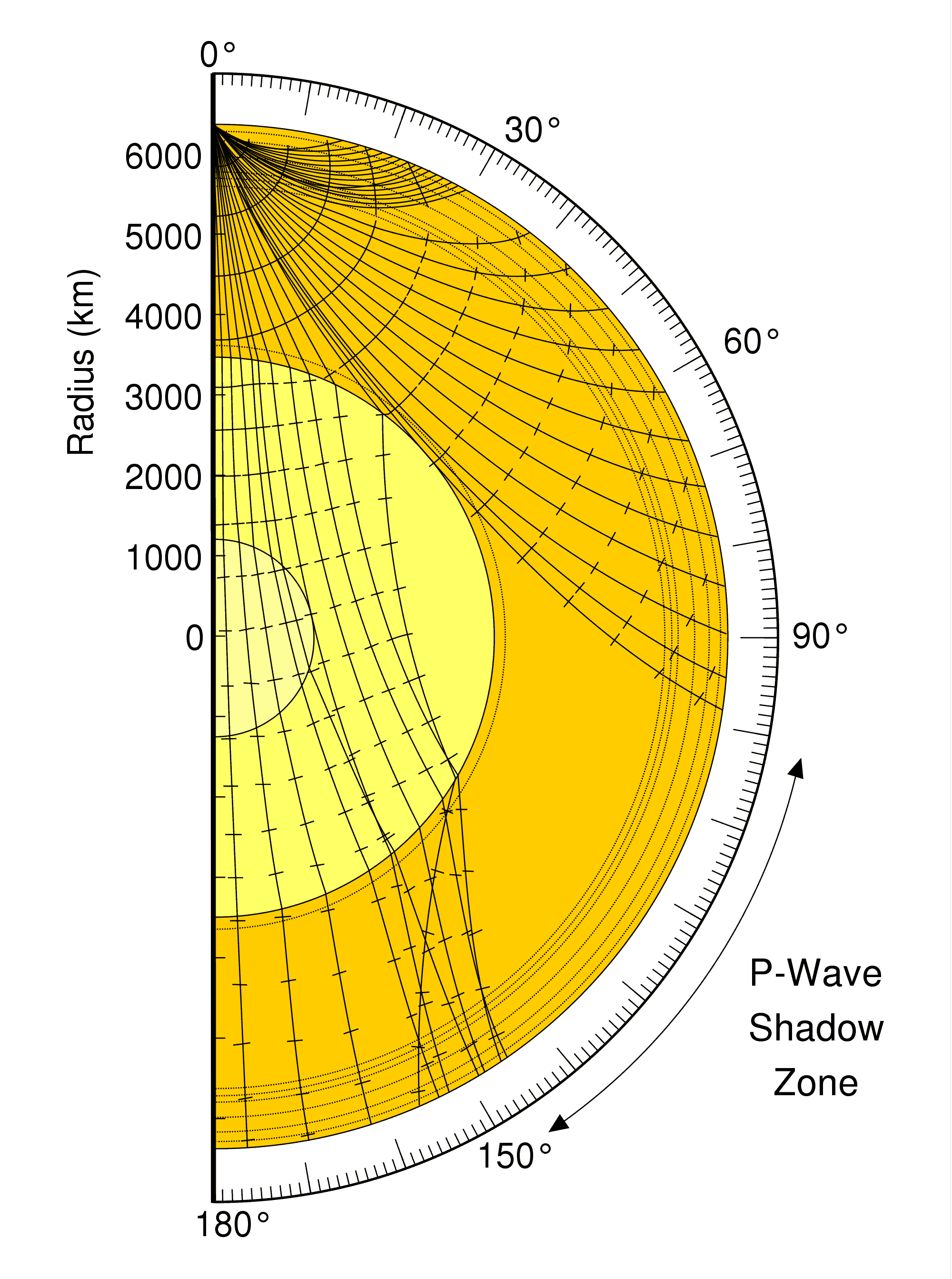 Much of what we know about the planet’s tectonics, the Earth’s deep structure, and even some features closer to the surface hinges on our understanding of seismic waves.[panel style=”panel-default” title=”Prospecting” footer=””]A few decades ago, people realized that they can mimic natural seismic waves through explosions or specialized machinery — at a much smaller scale. Similarly to how earthquake waves can reveal a lot about the subsurface at a large scale, these man-made waves are used to infer properties of at a smaller scale.

This is widely used as a prospection tool, particularly for oil and gas reservoirs, but to a smaller extent, also for mineral resources, water, and even environmental studies.[/panel]

Other types of seismic waves

If you’ve made it this far — first of all, congrats — you might be looking for a more detailed classification of seismic waves. Seismologists apparently love to draw up wave categories, not necessarily depicting different types of waves but rather describing where those waves have passed through. So while primary, secondary, Rayleigh, and Love waves are abbreviated by P, S, R, and L respectively, they can gain additional notations. For instance, a g notation indicates that the wave only travels through the crust, without any ocean floor in its path. Conversely, a w indicates that the wave traveled or bounced on the ocean floor.

In theory, there are an infinite of paths for waves to take — although in practice, their energy decays as the travel through the Earth. However, they can still reach an impressive number of bounces, and the notations add up. So you can end up with wave names such as PKiKP or SKS.