This animal keeps on surprising us. 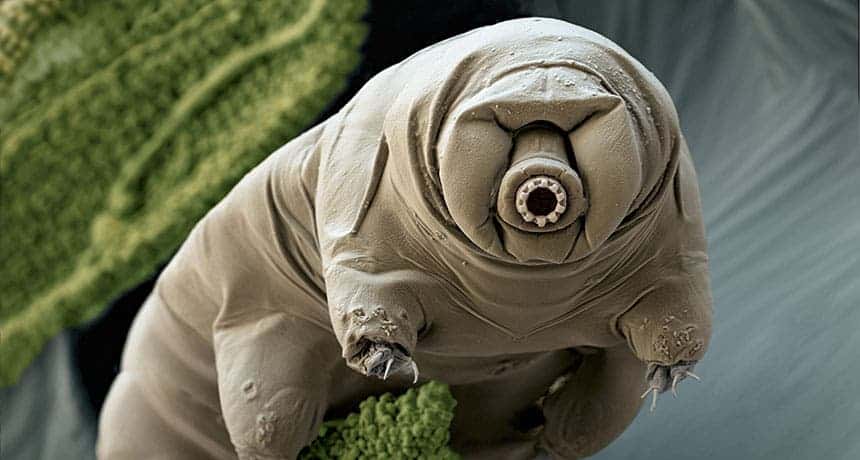 Tardigrades are the toughest, most resilient animals we know of. They can survive temperatures from 1 K (−458 °F; −272 °C) to about 420 K (300 °F; 150 °C), pressures six times greater than those found in the deepest ocean trenches, ionizing radiation at doses hundreds of times higher than the lethal dose for a human, and the vacuum of outer space. One tardigrade female was brought back to life after being frozen for 30 years then birthed 14 healthy babies.

Simply put, the tardigrade, also known as the water bear, is the most extreme survivalist out there. If there’s an animal that knows how to make it against all odds, it’s this guy and, as you might imagine, a lot of people are interested to find out what its secret weapons are.

The water bear is able to withstand such extreme conditions by going into a sort of safe mode, as it dries up into a little barrel called a tun. In this form, neither heat, cold or the wretched vacuum of space can kill it. Essentially, the tiny bear which is smaller than 1 millimeter enters a state called anhydrobiosis during which the metabolism shuts down.

Now, researchers from the University of North Carolina at Chapel Hill have found another ace up the water bear’s sleeve. During a dry spell when water is scarce anti-dehydrating proteins called tardigrade-specific intrinsically disordered proteins (TDPs) become vitrified. When this happens all the tardigrade’s dehydration-sensitive tissue and cells become protected by a glass surface. This way, sensitive proteins and other biological molecules are locked in place. They can’t fold, they can’t break apart nor can they aggregate together, which explains how the animal can survive in space and then come back to life like nothing happened within an hour.

The video below shows how much the water bear shrinks when deprived of water.

The team led by Thomas Boothby intentionally subjected the tardigrades to conditions that would force them to dry out. Meanwhile, they carefully monitored the animal’s gene activity. Boothby and colleagues noticed a spike of activity in a group of genes when the TDPs were produced. When such genes were blocked through genetic engineering, the tardigrade died of dehydration.

When bacteria and yeast were artificially infused with the aforementioned genes, these became much more resilient in the face of dehydration. This remarkable experiment suggests that, at least partly, the tardigrade’s tricks can be passed down to creatures. For instance, one interesting idea would be to produce new genetically modified crops that carry TDP genes to help them survive droughts. California’s worst drought in history, which is still not over and sure as heck isn’t the last, serves as a reminder that such crops are badly needed.

Previously, a 2008 study concluded that the tardigrade’s anhydrobiosis is linked to specialized sugars called trehalose. Tree frogs use the same sugar molecules to come with dry environments as well but not everyone was convinced the water bear uses the same mechanism because the study could only find trehalose-linked processes in only one species of tardigrade. Indeed, Boothby found tardigrades either don’t make or make very little amounts of trehalose.

It’s amazing however that TDPs work much in the same way as trehalose — they both protect cells by forming literally glass structures. So, what we’re essentially dealing with is yet another textbook example of convergent evolution — two animals (tardigrade and tree frog) totally unrelated from each other who evolved the same adaptive trait.

Another water bear trick involves using other proteins to shield its DNA against radiation. A previous research found  17.5 percent of a tardigrade’s genome was comprised of foreign DNA, including genes from bacterial species that can withstand extreme pressure and heat.

Next, the researchers plan on investigating other animals and even plant seeds which seem to survive desiccation to see whether they use the same proteins. Besides drought-resistant crops, such investigations might one day lead to amazing practical applications. One immediate application could be a new medium for storing vaccines and pharmaceuticals at room temperature by using dehydration instead of refrigeration. A much farther away application might involve dehydrating people to induce a hibernation-like state, which could be useful in interstellar flight.