Speed of light may fluctuate in vacuum, controversial studies suggest

by Tibi Puiu
in Discoveries, Physics
Reading Time: 2 mins read
A A
Share on FacebookShare on TwitterSubmit to Reddit

Since Einstein first postulated his theories of general relativity, physicists have constructed models describing the Universe that mainly revolve around the idea that the speed of light is constant through vacuum. Two new studies, yet to have been published in peer-reviewed journals, suggest that light through vacuum actually fluctuates, albeit the deviations are infinitesimal. Still, if their new studies hold valid, then some ideas would require refinement, while a  caveat that states that the speed of lighet varies would need to be included. 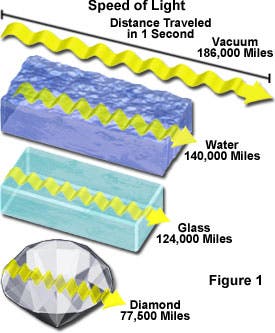 One of the two papers is authored by Marcel Urban and colleagues  from the Univ. of Paris-Sud, who claim they have identified a quantum level mechanism for interpreting vacuum as being filled with pairs of virtual subatomic particles with fluctuating energy values. Though seemingly utterly empty, an intriguing concept in physics holds that vacuum is filled with continuously appearing and disappearing particle pairs such as electron-positron or quark-antiquark pairs. The lives of these subatomic particles is extremely short, however it may be enough to cause a displacement in the speed of light.

The team lead by Urban have created a detailed quantum mechanism that would explain the magnetization and polarization of the vacuum, referred to as vacuum permeability and permittivity, and the finite speed of light. In other words, the speed of light might depend on the properties of vacuum.

In the secondly discussed paper, Gerd Leuchs and Luis Sánchez-Soto, from the Max Planck Institute for the Physics of Light in Erlangen, Germany complement the findings of the first paper and claim that the speed of light and the so-called impedance of free space, are indications of the total number of elementary particles in nature.

If found valid, though, these fluctuations would be minuscule. Just how tiny? Well fluctuations in time are estimated to be somewhere around the realm of 50 attoseconds per square meter, where an attosecond is one quintilllionth (10^-18) of a second. Just so you can get a better idea one attosecond is to a second what one second is to 31.71 billion years and 320 attoseconds represent the require time for electrons to transfer between atoms.

Even so, traveling from extremely vast distances across, like light emitted from the early Universe, light might become visibly slowed down.  The two studies will first need to survive further vetting since both have yet to finish the peer-review process.