Watch the (2nd) biggest book in the world get digitized, all thanks to the British Library

It's not the size of the book that matters, it's how you digitize it.

by Alexandru Micu
in Great Pics, History, News, Videos
A A

This mammoth of an atlas is so big that you need two people to flip the pages. It’s so heavy you need even more people to move it around. And now, almost three and a half centuries after its creation, the Klencke Atlas has been fully digitized.

The Klencke Atlas is instantly recognizable, and for good reason — this atlas is the crown jewel of the British Library’s cartographic collection and dwarfs lesser tomes, towering an incredible 1.75 meters in height (roughly 6 ft) by 1.9 meters wide when stretched open (about 6,5 ft). Since its creation in 1660, the atlas has been the biggest book on the planet, likely the whole Solar System all the way up to 2012 when Millennium House’s gigantic publication Earth Platinum claimed the title with a .5 meter advantage.

Creation of the book is attributed Dutch Prince John Maurice of Nassau, but it’s named after Johannes Klencke who in 1660 presented it to King Charles II of England to celebrate his restoration of the throne. At least, that’s the official reason — rumor has it that the Dutch delegation, mostly made up of sugar merchants, aimed to secure a favorable trade deal with England with the Atlas, as Charles was a known map enthusiast.

And boy oh boy a kingly present it was, indeed. The Klencke Atlas isn’t an atlas in the strictest sense of the word, since it wasn’t intended to be read and enjoyed as a regular book — the size alone made that a very challenging, rather infuriating task. Rather, it represents a collection of maps meant to removed from the spine and displayed on walls. It contains 37 maps which held the sum of geographical knowledge in Europe at the time — Britain and other European states, Brazil, South Asia, and the Holy Land — transposed onto 39 beautifully executed, detailed, and engraved sheets. The sheer size and complexity would send a clear message to anyone who saw it: king knew and ‘owned’ the geography of the world.

Luckily for us, the king liked it so much that he kept it among his most prized possessions in the ‘Cabinet and Closset of rarities’ in Whitehall. There it was kept safe and well cared after for until 1828, when King George III gave the hefty atlas to the British Museum as part of a larger donation of maps and atlases. There it was re-bound and extensively restored in the 1950s, and is currently held by the museum’s Antiquarian Mapping division, keeping watch on the entrance lobby of the maps reading room.

Since it is so old and so evidently unique, the Klencke Atlas has usually been left to rest out of the spotlit. The only time the public could see it with its pages opened since its creation 350 years ago was in April of 2010 at an exhibition organised by the British Library. But such a book shouldn’t be kept hidden — and yet, to keep it from being damaged, one must keep it very safe. What do to?

Well, one solution is to copy it. Just last month, the British Library teamed up with Daniel Crouch Rare Books to digitize the whole book. It which took several days of several people transporting the book, mounting it into an XXXL stand to take the shots, flipping the mammoth pages, and days of photographing each page so every map was fully recorded.

The online version can be viewed on the British Library’s website. They also put together this cool time-lapse video so you can see how the whole process went. Enjoy! 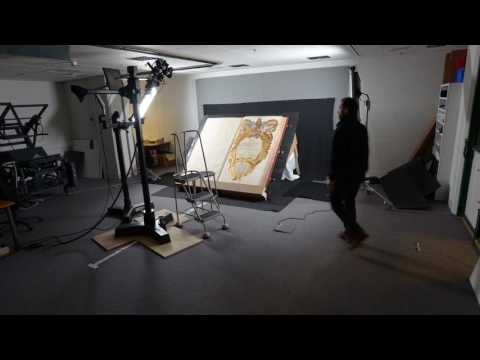