Tomorrow's windows might be made from wood -- transparent, energy-storing wood.

by Mihai Andrei
in Materials, News
A A

Nowadays, wood is more frequently associated with mountain cabins or trendy office buildings — but a new type of modified wood might have a special place in tomorrow’s futuristic architecture. The newly developed transparent material not only transmits light, but also absorbs and releases heat, and is biodegradable.

The idea for this technology started three years ago, when lead investigator Lars Berglund, Ph.D., and colleagues at KTH Royal Institute of Technology in Stockholm, Sweden, produced transparent wood by removing a light-absorbing component called lignin from the cell walls of balsa wood. To reduce light scattering, they incorporated acrylic into the porous wood scaffold. The material was physically strong, enabling it to bear heavy loads, and had a very desirable property: it was technically transparent, allowing light to pass through, but it was hazy enough to provide privacy if it was used as a window.

Now, the team added a polymer called polyethylene glycol (PEG) to the delignified wood. PEG is able to store heat, and due to its chemical structure, it’s also very compatible with wood.

“Back in 2016, we showed that transparent wood has excellent thermal-insulating properties compared with glass, combined with high optical transmittance,” says Céline Montanari, a Ph.D. student who presented the research at the meeting. “In this work, we tried to reduce the building energy consumption even more by incorporating a material that can absorb, store and release heat.”

The key to the technology is the phase-changing nature of PEG. PEG is a solid, but it melts at a temperature of 27 degrees Celsius (80 degrees Fahrenheit), storing energy in the process. The melting temperature can be adjusted by using different types of PEGs. The idea is that during the daytime, the material absorbs heat and stores it, later releasing it during the night.

The team encapsulated PEG within the de-lignified wood scaffold. This ensures that the PEG doesn’t leak away after it melts. Acrylic was added into the material to protect it from humidity. Like the previous version, the resulting material was transparent though hazy, very strong, and it has the added bonus of storing heat. It’s also mostly biodegradable.

“The PEG and wood are both bio-based and biodegradable,” Berglund notes. “The only part that is not biodegradable is the acrylic, but this could be replaced by another bio-based polymer. 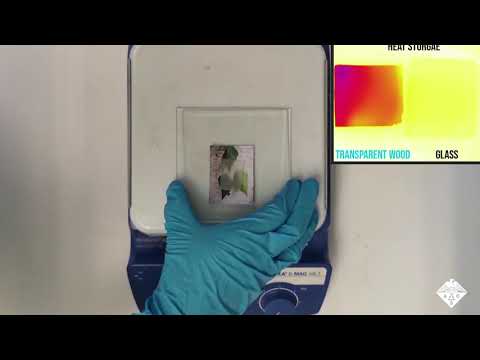 Now, the only concern is to make material production cheap and scalable enough that it can be used industrially. Researchers estimate that it might be used in practical applications within five years, though its usage will probably remain niched. There’s also a lot of room to improve the energy storage capacity of the material, tomake it even more efficient.

Results have been presented at the American Chemical Society meeting.