It's one of the greatest evolutionary stories involving our own distant ancestry.

by Contributing Author
in News
Reading Time: 6 mins read
A A
Share on FacebookShare on TwitterSubmit to Reddit 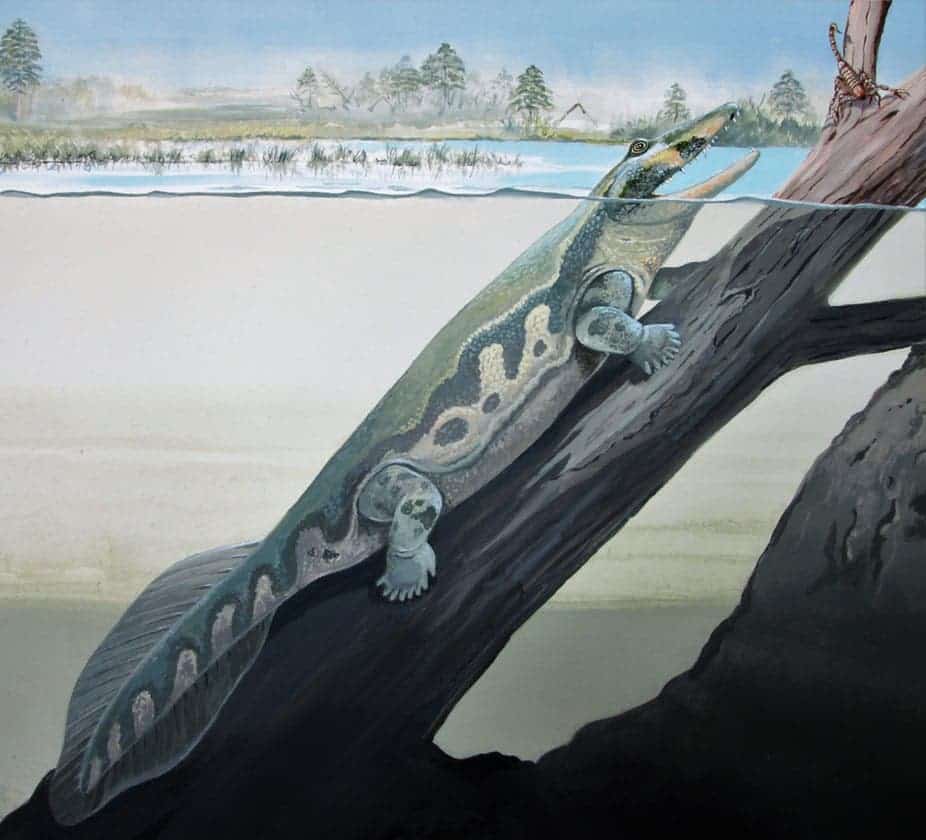 Some of our ancestors had four legs, a finned tail and lived in water. They were aquatic tetrapods which, after the end of the Devonian period 359 million years ago, increasingly moved onto the land. These land dwellers were the ancestors of all amphibians, reptiles, birds and mammals.

Fossil records have always suggested that those aquatic Devonian tetrapods never lived on what is today the African continent. At the time, prior to the collision of Gondwana and the northern continent of Laurussia around 320 million years ago, Africa was part of the supercontinent called Gondwana. Gondwana also comprised of modern South America, Australia, Antarctica, India and Madagascar.

The only records of Devonian tetrapods from Gondwana were a jaw and some footprints from eastern Australia which at the time formed part of the tropical northern coast of Gondwana.

Almost all of the sparse records of Devonian tetrapods came from the tropical regions of Laurussia. It was made up of what are now North America, Greenland and Europe. This led to a commonly held scientific assumption that all Devonian tetrapods lived in tropical environments and that they probably originated in Laurussia.

But a discovery I made at a fossil site in South Africa’s Eastern Cape province turns this view on its head. During the Devonian period what is now Africa lay over the South Pole; the Eastern Cape was well within the Antarctic Circle. My discovery of two separate fossils tetrapod species proves that tetrapods lived all over the world by the end of Devonian.

The fossil species belonging to two previously unknown genera, which I’ve named Tutusius and Umzantsia, are significant to our understanding of evolution. It means that tetrapods weren’t specifically tropical, and so their “step” from water to land wasn’t necessarily uniquely tied to the conditions in tropical environments. They may equally well have evolved under very different conditions nearer the poles.

This find will encourage people to look all over the world for clues to this key macroevolutionary transition, rather than just reinforcing the previous assumptions about where they lived by only looking for clues in tropically deposited rocks.

It also means that we can hope to find more clues to this important stage of our development here in Africa – which wasn’t at all expected before.

For the past 20 years, I’ve been carefully flaking through blocks of rock rescued from a fossil site called Waterloo Farm near Grahamstown in South Africa. I worked on the site in the mid 1990s and was intent on continuing research there. However, roadworks in the area in 1999 and again in 2007 threatened this unique piece of ancient heritage.

The black shale from Waterloo Farm was deposited as fine, organic-rich oxygen-depleted gooey mud at the bottom of a brackish estuarine lake, seasonally linked to the sea. It is the only known site from the latest Devonian in all of Africa that preserved the remains of bony animals, including about 20 species of fish that were previously unknown to science.

Some of these exhibit rare preservation of their soft tissues, such as Priscomyzon, the exquisitely preserved remains of the world’s oldest fossil lamprey.

The special type of preservation has also preserved an unparalleled record of algae and waterweeds, bivalves and eurypterids that shared the lake with the bony denizens. The woodland that lined the landward side of the lake is also represented by the remains of dozens of species of plants. Scorpion fragments that were washed into the estuary provide the earliest record of land living animals from Gondwana.

All of this was almost lost. But when I approached the South African National Roads Agency Limited, which is responsible for road management, they agreed to help me rescue tens of tons of hand mined shale blocks for systematic ongoing excavation so they could be thoroughly checked for fossil remnants.

These are stored in custom made sheds to protect them from the weather and excavation is ongoing. I have already collected thousands of fossils which have become part of the Albany Museum’s collection in Grahamstown.

It was while flaking through a block of the Waterloo shale I uncovered the cleithrum of the species I’ve named Tutusius. This is one of the main bones that form part of the shoulder girdle of fishes and early tetrapods. As a result of the radical change in structure and movement during the fin to limb transition its structure in early tetrapods is very distinctive.

I immediately recognised it as being from a Devonian tetrapod, which was confirmed by tetrapod experts Professor Michael Coates of the University of Chicago and Professor Per Ahlberg of Uppsala University in Sweden. At this point I started discussing a possible collaboration with Professor Ahlberg.

Then in early 2017 I discovered a second but different tetrapod cleithrum, this one hidden among fish scales on a slab I collected nearly 20 years ago at Waterloo Farm.

This bone belonged to the genus I’ve named Umzantsia. I emailed Professor Ahlberg a picture of it. He was equally excited and we made arrangements for him to join me in South Africa to write up the discoveries together.

In September 2017 we carefully combed through the Waterloo Farm collection and identified a number of other bones from Umzantsia. We’ve examined these and found many characteristics to confirm that the bones belong to a stem tetrapod species.

The next step – in between my lecturing duties and writing up of scientific papers – will be to conduct further excavations at the Waterloo Farm sheds. I feel confident that these will unearth exciting new tetrapod remains. It’s also possible, though substantially less certain, that we may find Devonian tetrapod remains that preserve impressions of their soft tissue – their flesh and skin.

An incredible record of evolution

These fossil finds involve South Africa in one of the greatest evolutionary stories involving our own distant ancestry. I asked anti-apartheid activist and cleric Archbishop Emeritus Desmond Tutu if he would mind me calling the first new genus Tutusius because I admired his pivotal role in our county’s evolution.

The country already has the best-preserved specimens shedding light on the emergence of humans from pre-human ancestors. Its Karoo region has produced the world’s best series of fossils documenting the evolution of mammals from their reptile-like ancestors.

Now we can add important insights into the evolution of the common ancestors of reptiles and mammals from fish. This means that South Africa has the most complete record through geological time of the origins of our own lineage from fish to humans.

This article was originally published on The Conversation. Read the original article.