An amazing 'living fossil' suggests ancient marine life evolved the software for walking before the hardware.

The transition out of water and onto land that some pioneering animals made, roughly 380 million years ago, was one of the most important moments in evolution. However, scientists are still trying to fit all the jigsaw-puzzle pieces together, to complete the full picture of how all of this went down.

The latest piece was added by researchers at New York University who found that the neural circuitry required to control ambulatory limbs was already present before the first tetrapods (vertebrates with two pairs of limbs) smelled the soil. In other words, the software had been developed first, and much later came the hardware (limbs).

Scientists have a reasonable idea of when the first vertebrates started walking on land by looking at the fossil records. For instance, we know of Tiktaalik, a 375m-year-old freshwater creature that grew to three meters long and had aquatic features mixed with others more suited to life on land. Strikingly, this ancient transitional species had wrist bones suggesting it was able to support itself on its front limbs. Older fossils lack these wrist bones, belonging to more fish-like animals. On the other hand, younger fossils point to tetrapod-like features, like distinct digits and limbs.

The New York University (NYU) researchers studied the little skate (Leucoraja erinacea) which is one of the most primitive living animals — what scientists sometimes call a ‘living fossil.’ This creature, which hasn’t changed much over the ages, can be quite peculiar, in the sense that it can “walk” on the seafloor, for lack of a better term. Just like a land animal’s gait, the skate uses its large pectoral fin to swim but also its smaller pelvic fins to walk with alternating, left-right motions.

Jeremy S. Dasen, associate professor at NYU, and colleagues used RNA sequencing to express the genes in the skate’s motor neurons, finding many of these appear in mammals as well. Some of these genes, for instance, are involved in the muscle control of bending and straightening limbs.

It’s very unlikely that this sort of circuitry evolved twice, implying that both skates and tetrapods inherited the same genes and neural pathways from their last common ancestor, some 420 million years ago. This is long before any tetrapod appeared, which can only mean that the circuits required for walking evolved before legs or feet appeared for the first time, as reported in the journal Cell. 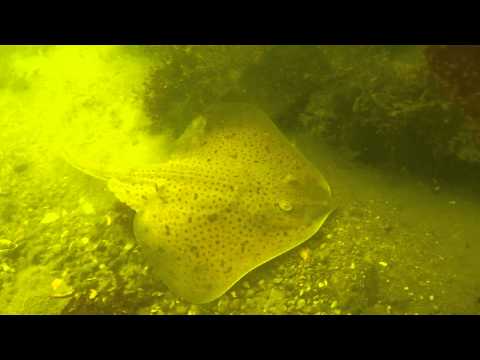 There are also other ‘walking’ fish alive today, besides the skates. The Blind cavefish uses its fins to propel itself across the riverbed or climb waterfalls. Mudskippers use their forelimbs like crutches to reel themselves forward and lungfish flip their bodies forward, leaving behind a footprint-like mark in the ground.

Researchers hope that their work will open the doors for new studies preoccupied with treating human neurological disorders. Unlike animals with a complex nervous system such as mice, skates have far simpler neural circuits, which makes them ideal for research. Perhaps, after understanding the basic architecture of the neural pathways that control walking, scientists might find a way to treat or repair motor neuron diseases or spinal cord injuries.

“Given that that skates use many of the same neural circuits that we do to walk, but with six muscles instead of the hundreds we use, the fish provide a simple model to study how the circuits that enable walking are assembled,” says Dasen, a member of the Neuroscience Institute at NYU Langone Health. “Until we understand how spine-limb nerve connections are wired, we can’t expect to reverse spinal cord damage and paralysis.”