Sleeping on the back in the third trimester doubles the risk of stillbirth.

A study of 1,000 British women suggests the risk of stillbirth doubles if women go to sleep on their backs during the third trimester. The results confirm the results of smaller studies performed in Australia and New Zealand. Doctors now advise pregnant women to sleep on their side during the last three months of pregnancy, including during daytime naps.

“What I don’t want is for women to wake up flat on their back and think ‘oh my goodness I’ve done something awful to my baby,” Prof Alexander Heazell, clinical director at the Tommy’s Stillbirth Research Centre at St Mary’s Hospital in Manchester, told the BBC.

“The question that we asked was very specifically what position people went to sleep in and that’s important as you spend longer in that position than you do in any other.

The UK oddly has one of the highest rates of stillbirth in the developed world, with about one in 225 pregnancies ending in stillbirth. In the Greater Manchester area, Dr. Heazell and colleagues have managed to reduce the incidence of stillbirth by 30 percent. Their most recent study involving 291 pregnancies that ended in stillbirth and 735 women who had a live birth suggests sleeping on the side could drastically the risk of the child dying. The findings appeared in the British Journal of Obstetrics and Gynaecology (BJOG).

According to the researchers, there’s a major artery that runs down the front of the spine and which is heavily involved in delivering blood to vital organs. Pregnant women in their last trimester have a heavy uterus which can pressure the artery by when on the back, disrupting blood flow. Previously, doctors used to think that this disruption predominantly affected the mother but there’s now ample evidence that suggests the baby is profoundly affected as well.

According to Dr. Heazell, the position you fall asleep in is the most important since it is the one you spend the most time in while sleeping. If you’re pregnant and wake up on your back, you shouldn’t worry — just turn your back onto the side and return to sleep.

Doctors also advise pregnant women to use a pillow behind the back to encourage side-sleeping. It doesn’t matter which side, left or right.

The British pregnancy charity Tommy’s is now campaigning to raise awareness of the study’s findings. 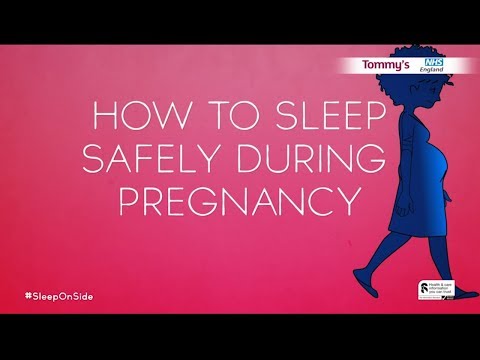