What if we’re not the first advanced civilization on Earth — How would we know?

This is not about conspiracy theories, but a legitimate scientific concern.

by Mihai Andrei
in Alien life, Archaeology, News
Reading Time: 4 mins read
A A
Share on FacebookShare on TwitterSubmit to Reddit

A new study raises an intriguing question: are we really the first ones to develop a civilization on Earth? Before you start thinking about aliens or wacky conspiracy theories, think about it this way: if another civilization had developed on the planet at some point in the geological past, how would we know about it? The new research explores that avenue; they call it “The Silurian hypothesis.”

What we know about these ancient living creatures, we know through fossils. Sure, we complement findings with computer models and the ecological principles we’ve discovered, but fossils are still the pillar of our knowledge of ancient life. But it takes special conditions for a fossil to form, and the results we’ve discovered so far are few and far between compared to the mind-blowing diversity our planet has witnessed.

To make matters even worse, our planet is an active environment and tectonic movement (and other geological processes) can destroy fossils and other clues about ancient environments. So to sum it up, remnants of life are rare, and even those rare bits are often destroyed by the Earth’s geology. Now, think about it this way: wouldn’t the same thing happen to evidence of an ancient civilization?

Remnants of a civilization

If humanity went extinct tomorrow, what would be left of us? The buildings, roads, and all the infrastructure — for a while. They would be engulfed by vegetation in a few years, and almost everything would be destroyed in a few centuries. After a million years, you probably won’t see any evidence that mankind ever existed — at the surface, anyway. 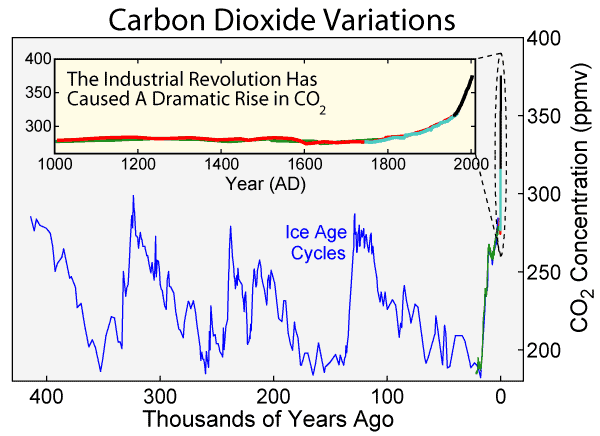 A diligent scientist one million years in the future might be able to tell that a civilization once existed. He’d find isotopic evidence of atomic explosions, an unnatural rise in CO2 emissions, perhaps even some remnants of former structures — but all these have essentially happened in the past century. In their new study, Gavin A. Schmidt (a climatologist with the NASA Goddard Institute for Space Studies) and Adam Frank (an astronomer from the University of Rochester) address this conundrum: are we the first civilization on Earth, and what does this mean for finding life on other planets?

Based on recent astronomical findings, we know that there is a huge number of stars in the galaxy, many of them harboring stars in the habitable zone. The number of planets capable of hosting life might be very high, thus also increasing the chances of intelligent life forms emerging. Scientists are looking for extraterrestrial life more and more — but what about here on Earth, what if there is a previous civilization we’ve still yet to discover? What if we are the scientists million of years in the future, hunting for an ancient industrialized civilization, what would we find?

“Since the mid-18th Century, humans have released over 0.5 trillion tons of fossil carbon via the burning of coal, oil and natural gas, at a rate orders of magnitude faster than natural long-term sources or sinks. In addition, there has been widespread deforestation and addition of carbon dioxide into the air via biomass burning.”

You’d move on to geomorphological features, like increased rates of sediment flow in rivers and its deposition in coastal environments, as a result of agricultural processes, deforestation, and the digging of canals. Then, you’d move on to biology, looking for evidence of domesticated animals. But the biggest smoking gun would be synthetic materials. The presence of synthetic materials, plastics, and radioactive elements (caused by nuclear power or nuclear testing) could also leave a significant mark on the geological record, and isotopes could last for millions of years. Finally, you’d look for extinctions caused by the rise of said civilization.

“The clearest class of event with such similarities are the hyperthermals, most notably the Paleocene-Eocene Thermal Maximum (56 Ma), but this also includes smaller hyperthermal events, ocean anoxic events in the Cretaceous and Jurassic, and significant (if less well characterized) events of the Paleozoic,” researchers continue.

After tightening these constraints for Earth, they move on to what we might potentially see on other planets. Mars and Venus might have been habitable millions of years ago, and if we want to see if this was the case, we need to know what to look for.

“We note here that abundant evidence exists of surface water in ancient Martian climates (3.8 Ga), and speculation that early Venus (2 Ga to 0.7 Ga) was habitable (due to a dimmer sun and lower CO2 atmosphere) has been supported by recent modeling studies,” they state. “Conceivably, deep drilling operations could be carried out on either planet in future to assess their geological history. This would constrain consideration of what the fingerprint might be of life, and even organized civilization.”

Journal Reference: The Silurian Hypothesis: Would it be possible to detect an industrial civilization in the geological record? arxiv.org/abs/1804.03748