The solid-state propulsion system works by ionizing the air.

Researchers at MIT have achieved the first sustained flight powered by ionic wind. Their small unmanned aircraft prototype has no moving parts and creates lift by ionizing the atmosphere around it in an electric field, instead of pushing the air with a propeller or turbine.

In order to move air around it, the world’s first solid-state aircraft generates an ionic wind. By applying a high voltage to a pair of electrodes, electrons are stripped off nearby air molecules, and the ionized oxygen and nitrogen molecules collide with neutral air molecules as they move from one electrode to the other. It’s this bulk movement of atmospheric molecules — the ionic wind, flowing in one direction and pushing the aircraft in the opposite direction — that enabled MIT’s drone-sized aircraft to stay airborne.

The ion-drive aircraft’s design is fairly simple: a thin wire acts as the leading edge, where nitrogen and oxygen get ionized by 20,000 volts of electricity. Behind the wire is a thin airfoil covered by the second electrode, which is charged with negative 20,000 volts, creating a difference of 40,000 volts. The winged body, a 40 kilovolts custom-built battery, and an electronic control system round off the rest of the setup.

Ion drives have been used in spacecraft for decades, but getting them to work in Earth’s gravity had not been possible until now. It’s thanks to advances in electronics and batteries that researchers were able to design an ion-drive aircraft capable of generating practical amounts of thrust.

There is a series of inherent trade-offs due to physical limitations that scientists had had to constantly joggle. For instance, an ion-drive generates the most thrust with a lower electric field strength. However, if the field’s strength drops below a threshold, air molecules won’t get ionized in the first place. Then, if the mass of the aircraft is too great, you need more power, which implies bigger and heavier batteries — at some point, the thrust is just not large enough to carry the airplane’s weight.

After tweaking various thruster designs, the researchers finally found a version that is capable of sustaining flight. Their a 5-meter wingspan,  2.5-kilogram aircraft made 10 flights, flying up to 9 seconds over a distance of 45 meters at a speed of 5 meters per second. It had to be launched from a mechanical bungee system in order to give it a brief time to power up. A computer algorithm optimizes the electric field constraints so that maximum thrust is achieved during flight. 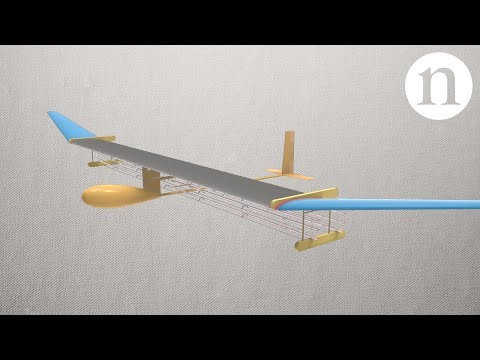 According to the MIT researchers, the ion-wind thruster generated 5 newtons for each kilowatt of power, which is on par with the output of jet engines. However, the overall efficiency of the system is just 2.5%m which is well below a conventional aircraft that pushes the air mechanically.

This is just a proof of concept, and the researchers are confident that they can come up with a much more efficient system. Their current design was limited by the fact that they had to fly inside an indoor track. By fitting larger wings, the authors say that they could up the efficiency of the system to 5% without changing the setup. Different designs for the electrode and better power conversion electronics could further boost efficiency.

An ion-drive might never be capable of generating enough thrust to carry human passengers or large cargo like conventional aircraft can. To move that much mass, you’d need a huge power input, which is not feasible with current battery technology. However, there are various applications where its low thrust density would be well suited to. A silent aircraft with no moving parts may be advantageous as an urban monitoring vehicle or for transporting small packages, thus avoiding the annoying noise pollution generated by mechanically propelled drones.

The ionic-wind-powered drone was described in the journal Nature.