New species of metal-eating plant discovered in the Philippines

Scientists from the Philippines have discovered a new plant with an unusual lifestyle – it eats nickel for a living. 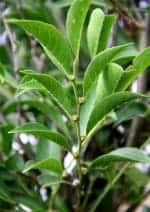 The new species is called Rinorea niccolifera, and it’s a part of the same genus as violets and pansies – but it has few things in common with those plants. Rinorea niccolifera‘s preferred food is nickel, accumulating up to 18,000 ppm of the metal in its leaves without itself being poisoned. 18,000 ppm is just a fancier way of saying 1.8% – which is quite an impressive figure!

Metal hyper accumulation in the plant kingdom is not unique in the plant kingdom, but it is extremely rare – in the case of nickel, it’s even more so. Throughout the world, only about 450 species are known for hyper accumulation of any kind – which, when you consider the total number of vascular plants (about 300,000 species), is not that much at all.

The new species, according to Dr Marilyn Quimado, one of the lead scientists of the research team, was discovered on the western part of Luzon Island in the Philippines. That area is particularly known for its abundance of heavy metals in the soils, which is why the plant evolved this way.

“Hyperacccumulator plants have great potentials for the development of green technologies, for example, ‘phytoremediation’ and ‘phytomining'”, explains Dr Augustine Doronila of the School of Chemistry, University of Melbourne, who is also co-author of the report.

It’s tempting to jump the gun and start thinking about using plants for metal exploitation (phytomining) – but that’s not really how it works. Plants have, of course, shallow roots, which would only allow for a surface exploitation, which is not really economically feasible. Even for gold sterile waste, scientists haven’t been able to make it work (though they’re getting pretty close) – and for a less valuable metal, like nickel, there’s virtually no chance.

But that doesn’t mean that this remarkable trait can’t be used in phytoremediation – using plants to clear out pollution. If you have a landmass that’s polluted with nickel, then Rinorea niccolifera might be a good bet. I’m sure we’ll be reading more studies about this plant pretty soon.