Pot is becoming very popular among Americans. Or it's always been, but we're only beginning to find out.

According to a recent Gallup poll, the percentage of American adults who confess regularly smoking marijuana has nearly doubled since 2013. The poll reveals 13 percent of Americans say they smoke regularly, while 43 percent say they’ve tried the drug at least once in their lifetimes, up from 38 percent in 2013. 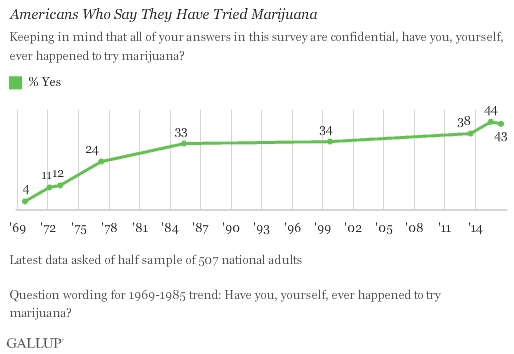 Cannabis is illegal in most of the United States, but twenty-three states have laws permitting medical marijuana. Then there’s Alaska, Colorado, Oregon, Washington and the District of Columbia where recreational use of marijuana is fully legal.

“It costs a huge amount of money to states,” Obama said in an interview in March 2015, speaking to Vice’s Shane Smith. “What I’m encouraged by is you’re started to see not just liberal democrats but also some very conservative Republicans recognize that this doesn’t make sense, including the libertarian wing of the Republican Party. They see the money and how costly it is to incarcerate.

“At a certain point, if enough states end up decriminalizing, Congress may then reschedule marijuana.”

In the last five years, marijuana laws have been considerably relaxed which has helped make pot more easily available. Most importantly, it has relaxed consumers in the face of the law as well, making them more confident and open to answer polls like this honestly. All in all, marijuana has been greatly destigmatized in recent years.

Very briefly, the other main take aways the Gallup poll found after it interviewed 1,000 American adults in all 50 states and the District of Columbia: