by Tibi Puiu
in Nanotechnology, News
A A

Researchers at the North Carolina State University have devised a new material that combines the elasticity of rubber with the strength of steel. The resulting material can stretch up to seven times its original length before failure while simultaneously being able to undergo a lot of strain. The material can also conduct electricity and regenerate itself, making it a promising candidate for stretchable electronics and soft robotics.

The fiber mimics human tissue which often combines several components to obtain a greater resilience against external loads. For instance, skin is made of a network of collagen bundled fibers which dissipate energy and prevent cuts from spreading. Human muscle absorbs tensile loads in a similar way with the help of the biomolecule titin.

“A good way of explaining the material is to think of rubber bands and metal wires,” said Professor Michael Dickey, lead author of the new study published in Science Advances.  “A rubber band can stretch very far, but it doesn’t take much force to stretch it. A metal wire requires a lot of force to stretch it, but it can’t take much strain – it breaks before you can stretch it very far. Our fibers have the best of both worlds.”

Dickey and colleagues took a gallium metal core and covered it in an elastic polymer sheath. The fiber basically has the strength of the metal core. However, it won’t fail when the metal breaks because the polymer absorbs the strain between the breaking points, transferring the stress back to the metal. This is similar to how human tissue will still hold together broken bones.

You can see the fiber in action in the video below: 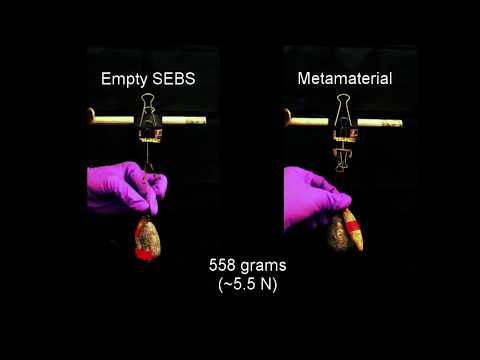 “Every time the metal core breaks it dissipates energy, allowing the fiber to continue to absorb energy as it elongates,” Dickey says. “Instead of snapping in two when stretched, it can stretch up to seven times its original length before failure, while causing many additional breaks in the wire along the way.

“To think of it another way, the fiber won’t snap and drop a heavy weight. Instead, by releasing energy repeatedly through internal breaks, the fiber lowers the weight slowly and steadily.”

The galium core is also conductive, making the fiber ideal in electronics and soft robotics, besides applications such as packaging materials or next-generation textiles.

“We used gallium for this proof of concept work, but the fibers could be tuned to alter their mechanical properties, or to retain functionality at higher temperatures, by using different materials in the core and shell.”

“This is only a proof of concept, but it holds a lot of potential. We are interested to see how these fibers could be used in soft robotics or when woven into textiles for various applications.”