Bee populations are going down dramatically, and our insecticides are largely at blame.

by Mihai Andrei
in Animals, Environment, News
Reading Time: 4 mins read
A A
Share on FacebookShare on TwitterSubmit to Reddit

Bee populations are going down dramatically, and our insecticides are largely at blame.

Human beekeeping has been practiced for millennia, but in recent years, bees worldwide have been in dire straits. In 2012 alone, a phenomenon called colony collapse disorder (CCD) wiped out about half of honeybee hives [read more here]. In CCD, worker bees basically go away from the hive and never return. We don’t yet know for sure why this happens, but there is a strong link with the intensive use of pesticides.

Pesticides can either kill bees or drive them crazy and now, a team has found that pesticides also threaten their breeding

The new study, conducted by researchers from scientists at the University of Nebraska-Lincoln and the University of Minnesota, was recently published in the journal Scientific Reports. It details how neonicotinoids are greatly reducing the queens’ ability to lay eggs. Because bees can only reproduce through queens, this means that when the queen suffers, the entire colony suffers.

“The queens are… the only reproductive individual laying eggs in the colony,” said lead author Judy Wu-Smart. “If her ability to lay eggs is reduced, that is a subtle effect that isn’t (immediately) noticeable, but translates to really dramatic consequences for the colony.”

“One queen can lay up to 1,000 eggs a day. If her ability to lay eggs is reduced, that is a subtle effect that isn’t (immediately) noticeable but translates to really dramatic consequences for the colony.”

Wu-Smart and her colleague, the University of Minnesota’s Marla Spivak, assessed colonies populated by 1,500, 3,000 and 7,000 honey bees, finding yet another unwanted side effect of pesticides. Bees affected by pesticides stored far less pollen, which they convert into a “bee bread” that provides crucial protein for recently hatched larvae. So not only are pesticide-affected bees creating fewer offspring, but they’re also not feeding them properly. 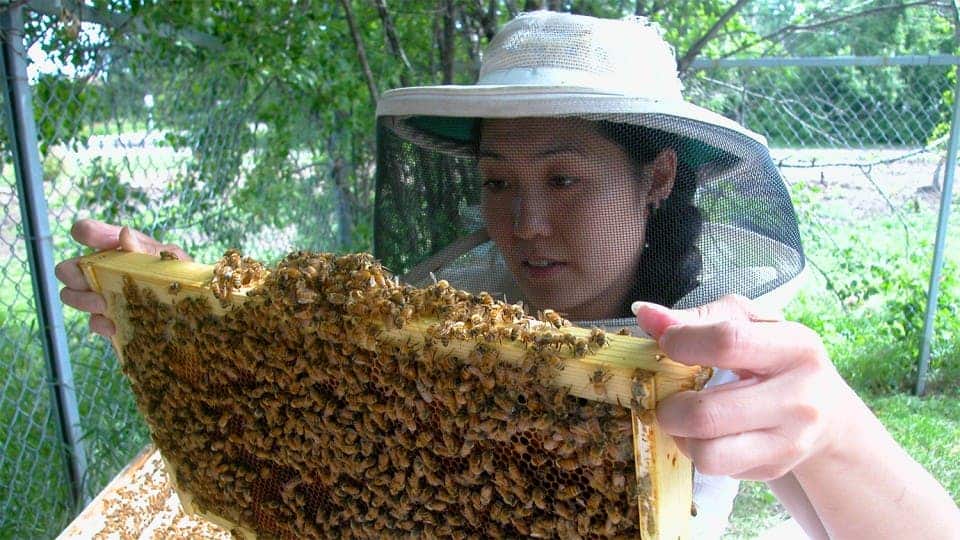 Image via University at Nebraska-Lincoln

“In many of these cases, we want to figure out why these colonies are dwindling when they should be at their peak production. This is providing some of that insight. It’s not answering all the questions, but it’s definitely something to consider.”

While queens in larger colonies are less likely to be affected, bees in small colonies are especially vulnerable.

“What we can say is that smaller colonies tend to be more vulnerable, because the queens are more likely to become exposed,” Wu-Smart said. “When we look at our general beekeeping practices, the early spring is when colonies are at their smallest size. They’re coming out of winter, and a lot of them are naturally smaller.”

Farmers are very quick to use pesticides, and rarely consider the effect they are having on the environment. This is why there is a heated debate about banning some pesticides which do most damage to bees and other pollinators. Italy did this in 2012 and reported excellent results, and the US is also in the process of banning some neonicotinoids.

But Wu-Smart said she doesn’t consider banning neonicotinoids a practical step in protecting honey bee colonies, instead advocating for regulating insecticide-treated seeds the same way the industry does with sprays and other application techniques.

“When you spray a pesticide, you have to consider things like wind and temperature to reduce drift,” she said. “You can’t aerial-spray on a windy day. With seed-treated products, there is no label telling (growers) that it’s been treated with an insecticide. There is no restriction as to when you can plant.

“When we do a lot of the extension outreach and talking to growers, many of them are unaware that this is even a problem. So just having that label on the bag saying that planting these seed treatments on a windy day could potentially cause some effects on bees could be useful.”

It’s a complex process with no clear answer, but one thing’s for sure: if we don’t do something fast, millions and millions of bees will suffer.