The hidden climate change-causing giants no one's talking about.

Oil and gas companies have recently been attracting a lot of negative attention from the public — as they should — for the impact their activities have on the climate. However, meat and dairy companies tend to fly under the radar, despite the fact that their contribution to global warming is highly significant. Although these establishments aren’t usually associated with global warming emissions, five of the biggest meat and dairy companies emit more greenhouse gases (GHGs) than ExxonMobil, Shell or BP, a new study says.

The report, titled “Emissions impossible – How big meat and dairy are heating up the planet”, is authored by researchers at the Institute for Agriculture and Trade Policy (IATP) and the NGO Grain.

According to the report, which looked at the world’s 35 largest beef, pork, poultry, and dairy companies that keep some record of their GHG emissions, just four companies provide complete emission estimates — these are NH Foods (Japan), Nestlé (Switzerland), FrieslandCampina (the Netherlands) and Danone (France)

Emissions resulting from meat and dairy emissions are not uniformly distributed around the world but rather originate from various hotspots that coincide with the major exporting regions: the US and Canada, the European Union, Brazil and Argentina, and Australia and New Zealand. Although they account for 15% of the world’s population, together, these regions account for 43% of the total global emissions from meat and dairy production. 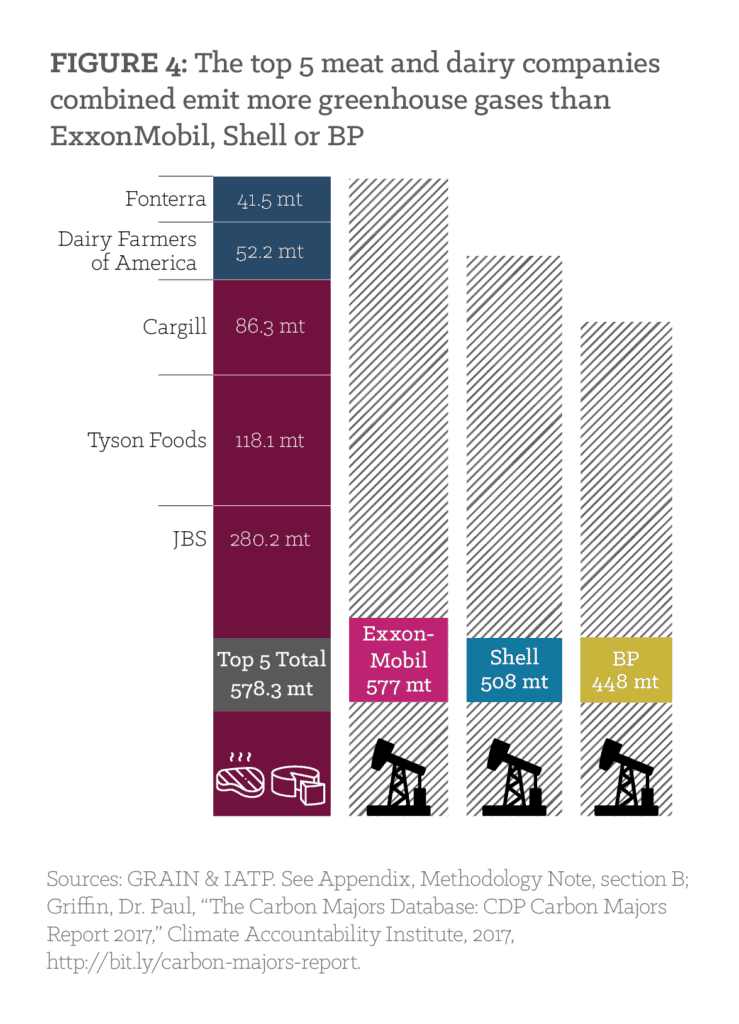 In line with the Paris Agreement — a pact that was signed by more than 190 countries — we need to cut down GHG emissions in order to keep global warming at no more than 1.5℃ (relative to Industrial Age levels). Meeting this goal is an extremely challenging endeavor that requires concentrated global action. But while transitioning away from fossil fuels to renewable energy is a no-brainer, other sectors — which can be just as taxing to the environment — are out of the limelight.

According to the new report, JBS, Tyson, Cargill, Dairy Farmers of America and Fonterra — which are the five biggest meat and dairy companies in the world — emit as many GHGs are ExxonMobile or Shell.

“If energy, transport, and other sectors successfully cut emissions in line with the Paris objectives while the meat and dairy companies continue to increase production, the livestock sector will account for a larger and larger portion of the world’s available GHG emissions budget of 13 gigatons,” the report warns.

If we continue to produce meat and dairy per business-as-usual, the livestock sector could eat up over 80% of this available carbon budget, according to the new report.

“For decades, the mass production of meat and dairy has been enabled by farmers getting paid below the cost of production, workers being exploited and taxpayers footing the bill for air, land and water pollution caused by big meat and dairy,” Shefali Sharma, director of the Institute for Agriculture and Trade policy (IATP), commenting that there’s no such thing as ‘cheap’ meat.

“It’s time we realised over-consumption is directly linked to the subsidies we provide the industry to continue deforesting, depleting our natural resources and creating a major public health hazard through antibiotic overuse. This report shows what a key role they play in creating climate change as well,” she added. 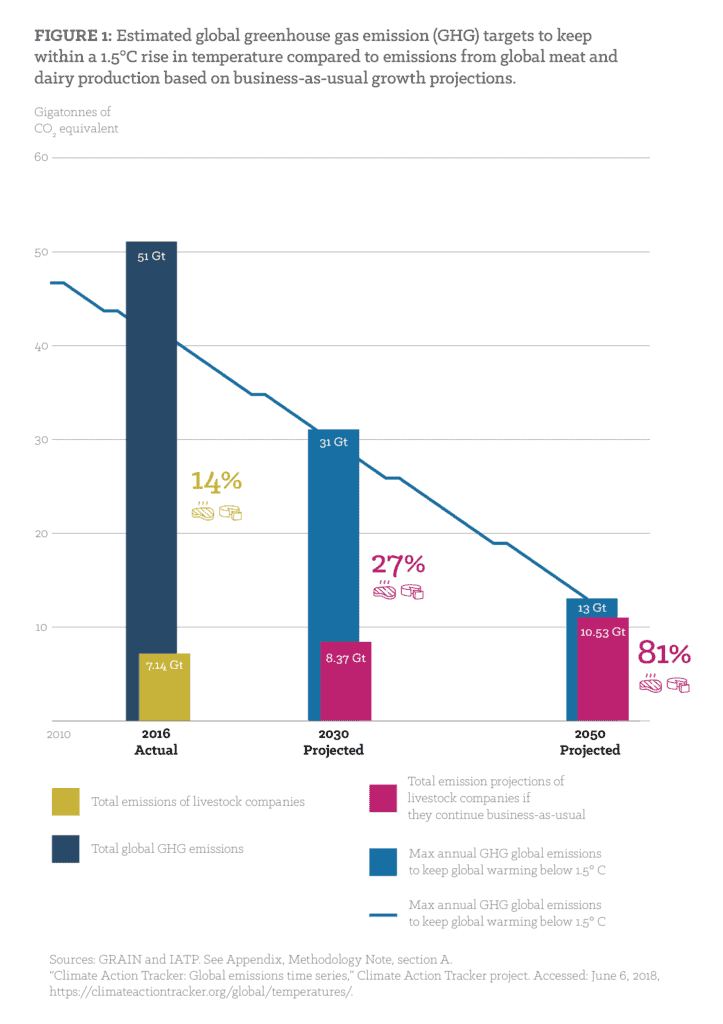 So, it looks like not only do we need to quench our thirst for oil but we also need to satiate our appetite for meats and dairy. With a growing populace, both in numbers and wealth, cutting down on meat will be a highly challenging mission — but that doesn’t mean it’s impossible.

“A vegan diet is probably the single biggest way to reduce your impact on planet Earth, not just greenhouse gases, but global acidification, eutrophication, land use and water use,” said Joseph Poore, at the University of Oxford, UK, in a press release. “It is far bigger than cutting down on your flights or buying an electric car,” he said, as these only cut greenhouse gas emissions.

Poore and colleagues are the authors of a study published this year in Science, which notes that livestock provide only 18% of all the calories we consume, but take up 83% of all farmland. Growing meat and dairy also take up a lot of water; every pound of beef requires about 8000 liters of water, whereas an equivalent quantity of potatoes consumes over a thousand times less.

But, of course, a largely vegan population in any part of the world is totally unrealistic at this point, especially in developed countries. What each of us can do, however, is to consume these sorts of products in a moderate fashion. If you eat meat and dairy every day, switching to every other day instead will instantly reduce your impact on the environment by 50%.

Sourcing meat and dairy locally is also important. A lot of emissions related to meat and dairy consumption is due to transportation, which is often thousands of miles from the production site. In the European Union, the European Commission is looking to restructure EU food systems towards more sustainable production — and short food supply chains are part of the agenda. In 2015, 15% of farmers in the EU sold half of their products through these short food supply chains, but the Commission hopes to increase the figure.