How male sea horses turn pregnant and carry their young

Seahorses are a unique oddity seeing how males, not females, carry the pregnancy and deliver the young.

Seahorses are a unique oddity seeing how males, not females, carry the pregnancy and deliver the young. It’s like that embarrassing Arnold Schwarzenegger movie. You know, the one where he participants in a weird science experiment and gets himself pregnant. Seahorses are a lot more interesting, though – they do this in real-life. Not much was known about this peculiar process encountered nowhere else in the animal kingdom. But Australian researchers at University of Sydney have now peered through the molecular and genetic mechanism that males use to nurture their young.

The whole seahorse reproduction process is interesting, for that matter. The male and female first engage in a beautiful dance, which can extend for days at a time each taking turns in the dancing ritual. Once the two have had enough or are satisfied with their partner, the female would lay something like 1,500 eggs in the male’s pouch. Mr. mom will then safe guard and nurture the eggs until they’re ready to hatch 45 days later. Females will check-up on the male daily during this whole time.

The males will puff up very large as they are getting closer and closer to the young being born. Researchers believe this is to ward off predators by making himself seem bigger.

Dr Camilla Whittington from the University’s School of Biological Sciences says the males are real heroes, nurturing their young during pregnancies much like female mammals. By closely following them, Whittingtton and colleagues found the male deliver nutrients through their pouch like energy-rich lipids, and calcium to allow them to build their tiny skeletons. Also, during the pregnancy the males have an altered gene expression judging from blood samples taken from the pouches, much like human mums.

“Regardless of your species, pregnancy presents a number of complex challenges, like ensuring you can provide oxygen and nutrients to your embryos. We have evolved independently to meet these challenges, but our research suggests that even distantly related animals use similar genes to manage pregnancy and produce healthy offspring,” Whittington said.

One of the interesting things about the brood pouch is that it appears to have evolved independently multiple times. There are two major lineages of seahorses and pipefish — trunk-brooding and tail-brooding — and the brood pouch structure independently evolved in each of these groups. Naturally, the question arises: how do you go from looking and behaving like a normal fish and turning into such a unique creature? Texas A&M University evolutionary biology researcher Adam Jones says “the first step in the evolutionary process was the elongation of the fish’s body, which the lab is currently studying. The next step was the addition of other unique structural features that seahorses possess, such as the bending of the fish into its unique shape. The head of a seahorse is unusual because unlike most fish, a seahorse’s head is at a 90-degree angle to its body, Jones explained. Seahorses also have a prehensile tail, meaning that, unlike most fish, they can use their tail to grasp onto things.” 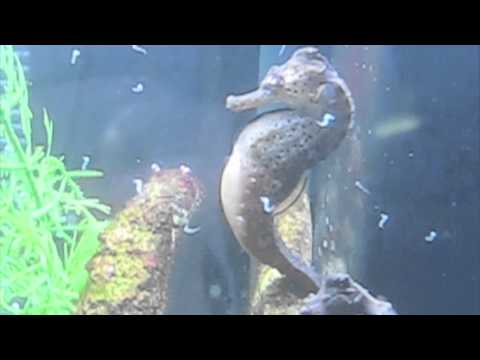 Once they hatch, the baby seahorses are very vulnerable.  Less than 1% of them live long enough to become mature enough to mate themselves. Habitat loss and tourism can make things even worse. There are actually farms  that specifically work towards increasing the population. They will take the young and ensure they are protected for the early stages of life. Then they will return them to the wild as they mature.