Sure, we think chimps are clever -- but never as clever as us.

Scientists are learning striking new features about nonhuman great apes on a yearly basis. Progress, however, is slow and some papers can actually be misleading as a result of some researchers’ skewed views and biases. In other words, our false sense of superiority leads us to perceive great apes such as chimps or orangutans are clever — just simply never as clever as humans.

In many respects, this approach mirrors inter-racial bias that was until not long ago prevalent. These are the conclusions of a recent paper published by leading development psychologists.

Can we understand great apes if we think we’re better than them?

The new paper published in the journal Animal Cognition was authored by Dr David Leavens, of the University of Sussex, with Professor Kim Bard, University of Portsmouth, and Professor Bill Hopkins, Georgia State University.

The trio combed through today’s available literature on great ape behavior spanning hundreds of studies over two decades. Their stark conclusion is that our knowledge of apes’ social intelligence is largely based on wishful thinking and flawed science.

“The fault underlying decades of research and our understanding of apes’ abilities is due to such a strongly-held belief in our own superiority, that scientists have come to believe that human babies are more socially capable than ape adults,” said Leavens in a statement.

“As humans, we see ourselves as top of the evolutionary tree. This had led to a systematic exaltation of the reasoning abilities of human infants, on the one hand, and biased research designs that discriminate against apes, on the other hand,” he added.

A prime example noted by the authors are those studies that discuss ‘joint attention’, a process whereby infants engage with one another about an object or event. This is a key indicator of brain development which can be communicated by pointing or shifting gaze from an object to an individual and back with the intention to direct the other individual to look at the same object.

Studies that focus on joint attention have always rated human infants as more developed than apes. Such findings, however, are somewhat silly simply because authors compare apples and oranges. Specifically, researchers would rate human abilities against apes reared in an orphanage.

Due to Western conventions of non-verbal communication, the human infants naturally outperformed apes on some tasks. What’s more, when a human infant points at distant objects, it’s clearly marked as a sign of cognitive sophistication but when a non-human ape does it, it’s marked as an ambiguous behavior.

Another study, for instance, compared 12-month-old human children with apes age, on average, 18-19 years old. This particular effort found that only humans could point towards an absent object. The authors of the present examination, however, claim that the study’s design took no consideration for the differences in human and ape age, life history, or environment. Case in point, more recent studies have shown that apes are indeed capable of communicating about absent objects, just like the human infants.

One 2013 study found striking similarities among chimpanzee, bonobo and human infant gestures and symbols suggesting language, as we know it, evolved from gesture-based communication first.

Studies have also shown great apes employ gestures in an intentional, flexible and goal-oriented ways and display them in various contexts like grooming, playing or feeding. For example, to request food, great apes usually use begging gestures in which they stretch their arms and open their hands towards other conspecific with food.

Furthermore, Amy Pollick and Frans de Waal reported that the gestural repertoire varies from group to group of the same species, in some kind of gestural dialect. Another researcher identified some gestures that sound us like “move away”, “please, groom me”, “stop that” or “follow me”. 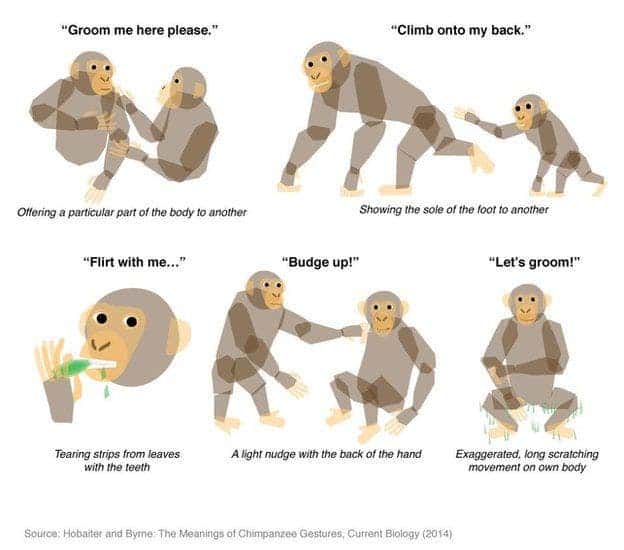 In 2015, scientists found that just like babies, bonobos exhibit a type of communication in which they use the same sound with different intonations to say different things. They use these high pitch “peeps” to express their emotions.

These are simply a couple of examples of complex gestures, evidence of high social intelligence, which were recently published.

“There is not one scientifically sound report of an essential species difference between apes and humans in their abilities to use and understand clues from gestures, for example. Not one,” Leavens said.

“This is not to say such a difference won’t be found in future, but much of the existing scientific research is deeply flawed.”

In many ways, this sort of flawed experimental design is reminiscent of the collapse of rigor from a hundred years ago when some psychologists would assert that Northern races were the most intelligent of all humans. We now know that this is not nearly the case. Instead, studies have shown that intelligence is highly sensitive to environmental input and that previous studies that claim otherwise used inadequate testing contexts. These were poor studies, in other words, and much of the same is happening with modern papers on great ape social intelligence.

“In examining the literature, we found a chasm between evidence and belief. This suggests a deep commitment to the idea that humans alone possess sophisticated social intelligence, a bias that is often not supported by the evidence,” Bard said.

The authors would like to see a paradigm shift and a revisal of evolutionary theory. They propose several solutions.

One would be cross-fostering where apes are adopted by human families. Previously, studies have shown that foster-apes are capable of communicating in ways other apes can’t. However, this method has its limitations, ethically-wise none the least.

Dr. Leavens and colleagues say that comparative behavior studies ought to be grounded in variables which can be objectively measured. Many skills and features currently in comparative psychology research can’t be observed or measured.

Also, if apes and humans ought to be compared fairly, they ought to be trained. No human infant is raised without some minimal amount of training from table manners to how to behave when a stranger enters the home. Some scientists claim that many human infant behaviors are spontaneous but that’s extremely difficult to say for sure and open to speculation.

Poor sampling is another common problem the authors have encountered. Almost all studies compare human infants from Western, industrialized societies to orphaned apes or those raised in sterile institutions.

The bottom line is that even scientists can be biased and practice inter-species discrimination. It is understandable. It’s challenging to make a huge mental leap and objectively assess the capabilities of a non-human species. But we have to if were to paint a fair and accurate picture of how our closest relatives.